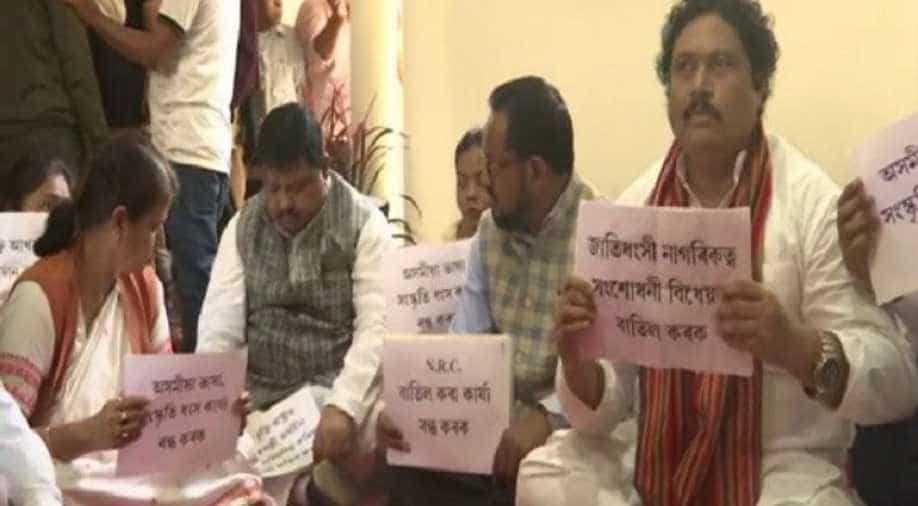 MLAs of opposition parties staged a protest demanding cancellation of the question hour and holding a discussion on Citizenship Amendment Bill and National Register of Citizens.

MLAs of opposition parties staged a walkout from on Thursday, on the first day of the winter session of the Assam Legislative Assembly that began here Thursday and staged a protest demanding cancellation of the question hour and holding a discussion on Citizenship Amendment Bill and National Register of Citizens (NRC).

"The reason behind the protest is the Citizenship Amendment bill that the union government is proposing to table in the parliament. That bill would definitely violate the Assam accord 1971," former chief minister Tarun Gogoi told reporters here.

"The bill`s motive is against the spirit of the constitution. It is against the right to equality and secularism which are enshrined in the constitution. We have seen mass agitations across the state on this issue but Chief Minister Sarbananda Sonowal is silent on this matter. He has no moral right to continue as the Chief Minister. The BJP government has sacrificed the culture of the state for the sake of power," he added.

Both Congress and All India United Democratic Front (AIUDF) demanded the cancellation of the question hour and to hold a discussion on the Citizenship Amendment Bill and NRC.

Speaker Hitendra Nath Goswami said that Question Hour session could not be called off despite the noisy scene. The Speaker did not cancel the Question Hour and subsequently, the Congress and AIUDF party staged a walkout.

There have been protests in Assam against the proposed Citizenship Amendment Bill as the Centre is going to table the bill in the parliament.