Opinion: Wang Yi's visit to India may not clear the mist in China-India relations 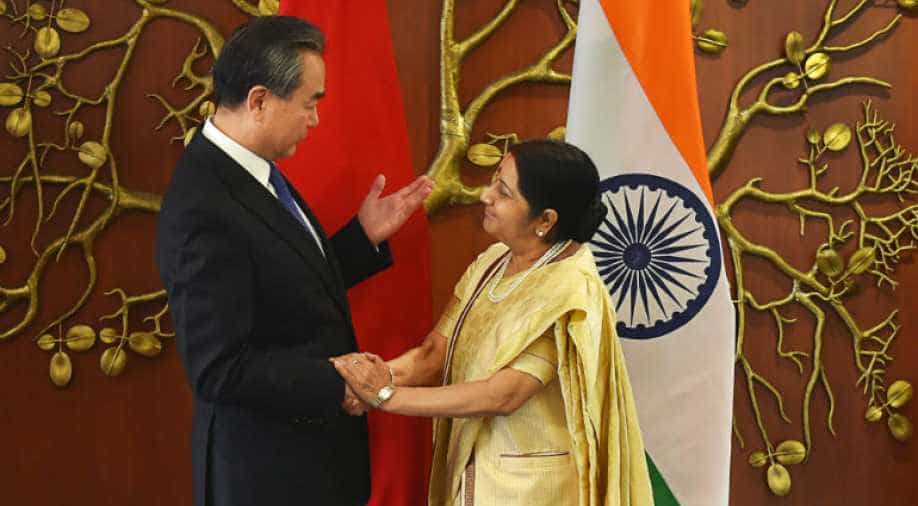 Foreign minister Sushma Swaraj with his Chinese counterpart Wang Yi ahead of a meeting in New Delhi on Monday. Photograph:( PTI )

Clearly, it is not the trilateral Russia-India-China (RIC) Foreign Ministers' meeting held in New Delhi on December 11 that made Wang Yi's visit to India significant. Rather, it is the current "cold peace" that exists in China-India relations after the prolonged Doklam border stand-off making the Chinese foreign minister's current visit significant.

Wang Yi's visit was significant in many ways. It was the first high-level Chinese official's visit to India after the two and a half month long Doklam border stand-off. The Chinese foreign minister's visit to India demonstrated once again that the multilateral mode of engagement keeps China-India ties moving even though their bilateral relationship is at a low tide. Over the years, the RIC foreign ministers' meeting might have contributed a little to expand the level of trust that is required to strengthen the bilateral relations among Russia, India and China. Still, this trilateral meeting remains to date one of the most valuable preparatory forums to generate broader understanding for BRICS and other multilateral channels of engagement among these countries. In fact, the RIC foreign minister's meeting has acted more as a consultative political mechanism to improve the understanding among Russia, India and China on regional and global affairs. In that context, Wang Yi's visit offered a much-required momentum to China-India relations with Russia at the regional level.

Additionally, consultative meetings that take place at the bilateral level during these multilateral forums come as an additional bonus to the entire spectrum of engagement. The Chinese foreign minister's meeting with Indian foreign minister Sushma Swaraj on the sidelines of the RIC meeting was certainly a positive move for their bilateralism. Fresh report indicates that both the Chinese and Indian Foreign Minister had a “positive and forward” looking meeting which was aimed to offer a “fresh momentum” to China-India bilateral relations. In a way, Wang Yi’s visit offered an occasion for Chinese and Indian leaderships and officials to think afresh how to approach the bilateral relations ahead to the year 2018. The Chinese foreign minister’s acceptance to address the India-China cultural evening organised by the Pravasi Bhartiya Kendra came as a solace that the bilateral relations need a flexible diplomatic and political approach on both hands.

The post-Doklam period witnessed a slow improvement in China-India relations. In fact, during the Xiamen BRICS summit, both Xi Jinping and Narendra Modi agreed to nurture ahead a “forward looking constructive” relationship. A “constructive” relationship that would be “forward-looking” is a part of their official “developmental partnership” which was primarily constructed during President Xi Jinping’s visit to India in September 2014. The essence of this “developmental partnership” is to forge a closer economic-oriented partnership, enhancing the decade-old “Strategic and Cooperative Partnership of Peace and Prosperity”. A range of bilateral dialogue mechanisms - Joint Economic Group (JEG), Strategic Economic Dialogue, Financial Dialogue, Joint Working Group (JWG), Defence and Security Dialogues, Strategic Economic Dialogue (SED), and Special Representatives (SRs) dialogue - are central to this partnership. These mechanisms have offered an official level of certainty to push forward the dialogue process between the two countries even though tensions between the two sides continue to recur concerning the boundary disputes. Thus, one might witness both China and India having regular meetings through these mechanisms in 2018. But the challenge would be how to expand the bilateral trade contacts that have been freezing for some time around US$71.18 billion between the two sides. Importantly, to India’s concern, the bilateral trade deficit with China is increasing.

Opportunities are aplenty for China and India to nurture their bilateral ties ahead. Still, it would not be easy to nurture a “forward-looking” partnership given the assertive strategic perspectives that both countries currently hold towards each other. India’s resolute stance on the Doklam border stand-off surprised Beijing enormously, from which Beijing is yet to recover completely and figure out how to configure its relationship with India forward. Besides, Beijing has not yet completely disengaged itself from the Doklam episode. Fresh Indian media report suggests that around 1,800 Chinese troops are still camping at Doklam even though the heavy winter have arrived in the plateau. But no matter what might be the Chinese approach towards India in times to come, India must be prepared to deal with a new China under Xi Jinping. Wang Yi’s visit to India was undertaken after the recently concluded 19th National Congress of the Communist Party of China (CPC), which has prepared a “new era” blueprint for China under Xi Jinping. Positioning China as the leader of the developing world and centre of the globalized world would be the new mantra of this “new era” plan. To promote this, China may employ a more consultative approach towards the developing world, but its approach towards India would be meagre since Beijing views India as a contending power to its developing-world leadership strategy.

Thus, New Delhi on its part needs to carefully observe Beijing’s powerful foreign policy team that is looking at Asian affairs, especially at matters relating to India, after the 19th National Congress. Under Xi Jinping, Chinese foreign policy is undergoing continuous change, where Wang Yi is expected to play an influential role in China’s policy approach to India. Wang’s foreign policy exposure in the Chinese decision-making continuum is outstanding. As a former Chinese Ambassador to Japan, a former Director of the Taiwan Affairs Office of the State Council and as a former Vice-Foreign Minister, Wang Yi is regarded as one of the finest and influential diplomats in the league of the CPC’s foreign affairs. As a key member of the 17th and 18th Central Committees of the CPC, he is regarded as Xi Jinping’s “Asia Man”. He is expected to play an influencing role in coming times on matters relating to key Asian affairs such as China-India boundary dispute, the South China Sea dispute or the East China Sea dispute.

Importantly, Wang Yi shares the distinction with Yang Jiechi, who is not only a member of the 18th Central Committee but a person in charge of China-India border affairs currently, especially the Special Representatives dialogue mechanism. With Yang Jiechi who has been recently elevated as a politburo member at the 19th National Congress, Wang Yi brings authority to China’s decision-making process towards key Asian affairs, including matters relating to India. Yang Jiechi, a State Councillor is higher in ranking than the Foreign Minister Wang Yi. In a possible scenario of Yang Jiechi relinquishing the position of special representative of China-India border affairs in March 2018, Wang Yi is expected to be in charge. Approaching China under these new leaderships in coming times would therefore require smart diplomatic and political foresight in India.

Wang Yi’s visit to India has offered a new political context for both the sides to rebuild the relationship afresh in 2018. Rebuilding the relationship would however require a flexible state approach on both sides. Xi Jinping’s new China might not really be prepared to have a flexible approach towards India. The same can be said about India’s current and future approach to China. India under Prime Minister Narendra Modi might not really succumb to any Chinese hard approach in coming times. Therefore, China-India relations would continue to make headlines even though the year 2018 might witness a more engaging relationship between the two countries at some level.

(Disclaimer: The author writes here in a personal capacity)