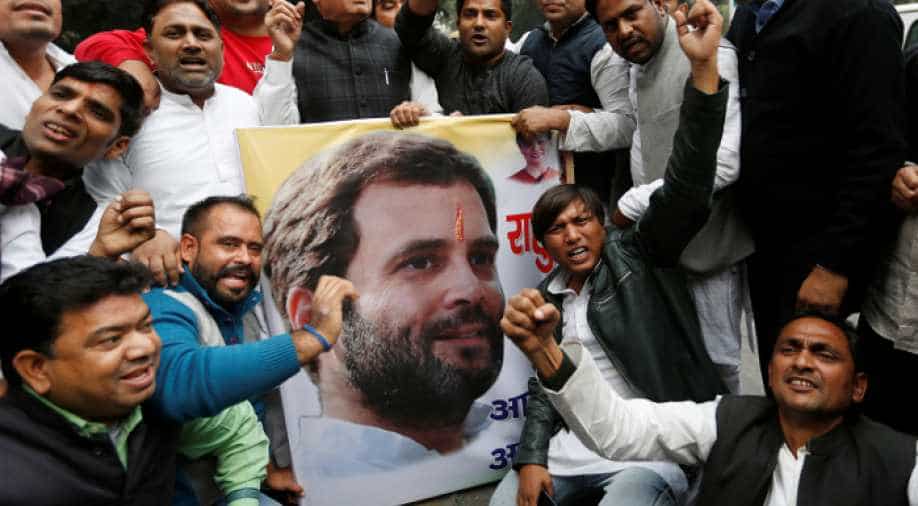 Rahul is following the ''2004 model'' when his mother Sonia Gandhi pitched-in with a coalition to take on the BJP juggernaut ultimately leading to the fall of PM Atal Bihari-led NDA. Photograph:( WION Web Team )

A day after being coronated president, Rahul Gandhi's political star seems to be on the rise. The political landscape could just be changing under Modi's nose, quite literally because this is Gujarat we are talking about.

Rahul, like Sonia in 2004, could be on a comeback track as BJP's big gamble - GST and demonetisation - begin to hurt at the hustings. In a campaign which saw mudslinging from both sides, PM Modi led from the front sparing no one from former PM Manmohan Singh downwards to the controversial chaiwala remark allegedly made by Congress leader Manishankar Aiyar.

Rahul's 'gamble' of tieing up with Hardik Patel's PAAS, Congress shrewdly cut the votes of BJP in a two-pronged strategy. The support given to Independent candidates along with PAAS supporters titled the scale in favour of the Congress. The grand old party was not expected to perform well, some experts felt it had lost control of the ground realities in the state, combined with the high-voltage campaign led by PM Modi.

The vote share in the Gujarat elections reveal the mind of the voters, the ruling BJP has won 49.1% of the votes, with Congress(41.5%) and Independents(4.3%) cornering over 45 per cent vote share. The BJP will view this with concern and dread, if Gujarat is seen as a "template" then life for the BJP could get tougher in the next state polls with the Congress realigning its strategy to tie-up with parties who have local and regional flavour.

In this sense, Rahul is following the ''2004 model'' when his mother Sonia Gandhi pitched-in with a coalition to take on the BJP juggernaut ultimately leading to the fall of PM Atal Bihari-led NDA.

In 2017, however, it is an altogether different political landscape which is ruled by PM Modi. With the Congress on a long losing streak in state polls ever since the BJP dislodged it from power in 2014, Gujarat polls could be a turning point both for the Congress and Rahul.

The Congress may still bring the BJP down the below 100-seat level, either way, Rahul's party is set to surpass all expectations as they had won just 43 seats in the last assembly polls in 2012. Congress winning over 70 seats would be a major boost for India's main opposition party which currently has just 44 MPs in the Lok Sabha. It will also drastically change the poll arithmetic in the Rajya Sabha in the future and will give the Opposition a window of opportunity.

Numbers alone do not always reveal the true picture but in Gujarat this time it has revealed itself to be the real barometer for the BJP without Modi at the helm. BJP which is led by regional satraps can ill afford to depend on PM Modi's charisma alone,  after Modi left the field in Gujarat the party has struggled to put a charismatic figure on top. This election has proved a Modi-less Gujarat is an open field for the Opposition, over the next five years it could open the door for the Congress and PAAS to put their noses in front.

The BJP should take Gujarat results as a wake-up call, rather than just another victory in the bag.