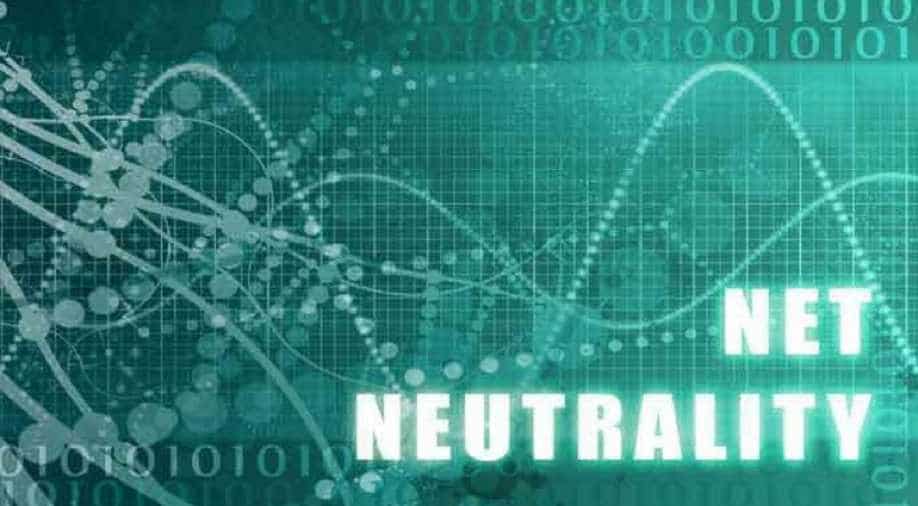 TRAI ruled in favour of net neutrality in February 2016 by prohibiting discriminatory tariffs for data after an extended campaign by internet activists. Photograph:( Zee News Network )

It is important for us to ensure tha the right of every Indian to access all legally-authorised Internet sites, at a fair price, is not compromised by ambiguous rules.

The recent rules approved by the Telecom Commission of India (TCI), the highest decision-making body within DoT, has laid down the framework for net neutrality in the country. Under these rules, Internet Service Providers (ISPs) will not be able to block or slow down the speed of particular sites, which may belong to their competitors.

But the government’s exemption to two broad categories of services — ‘critical IoT services’ and ‘specialised services’ need to be considered. IoT, which stands for ‘Internet of Things’, involves turning ‘dumb’ physical objects into ‘smart’ objects, examples of which include autonomous vehicles and remote diagnostic surgery. The DoT’s logic for exempting IoT services from net neutrality is that they provide ‘critical services’ and thus need a separate and dedicated bandwidth, which will be faster than normal.

At first glance, the logic seems sound. But it gets more problematic as one goes through the fine print. Under the current rules, IPTV (video streaming) and VoIP (voice communications and multimedia), can also come under the category of ‘specialised services’. What this means is that any ISP say JIO, Airtel, Idea, etc., can theoretically charge you a different rate based on your service (IPTV) usage as opposed to the rate you currently pay for your Internet usage.

This violates the premise of net neutrality, which means that for keeping the Internet neutral, customers can use whatever service they want at the same rate. If you are charged a different rate, that is not net neutrality. In the case of VoIP, an ISP can theoretically launch an App, which might perform better on its server than, say, WhatsApp. This again violates your right to use common services and forces you to opt for services that your ISP prefers.

The other issue to consider is why have the rules left these sections vague, especially when it is specifically clarified under other agreements. The Virtual Network Operator (VNO) licence agreement explicitly states: ‘Internet access means use of any device/technology/methodology to provide access to internet, including IPTV and all content available without access restriction on Internet...’ The question then arises: If access to and non-discriminatory use of IPTV has been stated here, why was it not mentioned in the rules formulated by the TCI? Currently, as it stands, not mentioning this would allow ISPs to charge what they like on video streaming. What is even worse is that there is a possibility that large conglomerates can launch IPTV services and monopolise the network.

Why does this matter? It matters because big services like YouTube, Netflix or TV channels aired online will get faster access. This heavy data of IPTV will monopolise Internet bandwidth which can ensure that people in ‘Internet vulnerable’ areas — such as students in rural areas — who are trying to use the Internet through the same ISP will suffer. India already suffers from poor connectivity and these people may have even more trouble connecting to the Internet, which again defeats the premise of net neutrality. It is the DoT’s responsibility to ensure that this does not happen and the vague wording doesn’t help.

The biggest issue though is the lack of clarity as to who will monitor the ISPs and what information they will have to provide to ensure they are complying with net neutrality norms. Currently, the rules do not make this clear. The Telecom Regulatory Authority of India (TRAI) needs to ensure that ISPs provide sufficient capacity to users to ensure net neutrality. For this, they should require ISPs to fully disclose the scale of specialised services that they are offering.

On that basis, TRAI can then assess whether sufficient capacity is being provided to ensure net neutrality and that the general quality of Internet access does not suffer by ISPs providing too many specialised services. In fact, going further, TRAI can and should only allow specialised services to be offered when it is convinced that the network capacity is sufficient. For this, tougher guidelines need to be set up.

The problem is that the wording of all these regulations is so vague that most ISPs or TSPs can get around it by arguing that they are not flouting net neutrality. One of the main arguments that they are likely to put forward is that IPTV is a service that requires a higher and specially-provisioned bandwidth and the traffic it generates does not intermix with the traffic and bandwidth set aside for other Internet sites.

As a result, ISPs will claim that they are not violating net neutrality, while at the same time they will justify the higher rates for IPTVs. Without specific legislation, it is likely that such logic can and will prevail. To stop this, ISPs need firm monitoring and for that a not-for-profit multi-stakeholder body needs to be put in place, which represents government, different categories of ISPs, representatives from research and academia, civil society organisations and consumer representatives. So far though, that has not happened.

India fought hard for net neutrality and this was seen in 2015 when over 800,000 Indians sent emails in under a week to TRAI, demanding a ‘free and fair Internet.’ It is important for us to ensure that those protests were not in vain, and the right of every Indian to access all legally-authorised Internet sites, at a fair price, is not compromised by ambiguous rules.