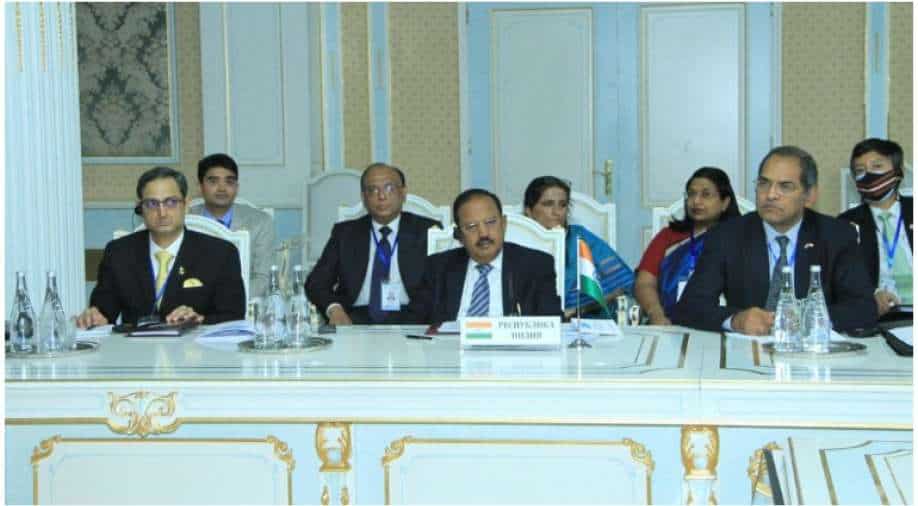 (Image- Sidhant Sibbal) Indian NSA Ajit Doval (seated in the middle) along with rest of the Indian delegation at SCO meet. Photograph:( WION )

During the meet, which was also attended by Pakistan NSA Moeed Yusuf, Indian side also called for full implementation of UN resolutions and targetted sanctions against UN-designated terrorist individuals and entities

The action to be taken on these terror groups has been proposed under SCO framework.

During the meet, which was also attended by Pakistan NSA Moeed Yusuf, Indian side also called for full implementation of UN resolutions and targetted sanctions against UN-designated terrorist individuals and entities.

Pakistan hosts one of the largest number of UN listed international terrorists. It has been seen to have been lax on efforts to bring them to book, so much so that Islamabad even applied for 'pensions' for listed terrorist like Hafiz Saeed. Saeed is the founder of LeT.

During the in-person meet in Tajik Capital Dushanbe, Indian NSA "strongly condemned terrorism in all forms and manifestations", sources said, pointing out that "perpetrators of terrorism including cross-border terror attacks should be expeditiously brought to justice."

More than a decade after the 26/11 terror attacks, Pakistan still has to act the perpetrators who are inside the country.

Interestingly, India also emphasised on adoption of international standards to counter terror financing including an MOU between SCO and Financial Action Task Force (FATF). It is an anti-terror-financing body.

The NSA underlined that in order to effectively combat terrorism, we need to monitor new technologies used by terrorists. This included use of drones and misuse of dark web, artificial intelligence, blockchain and social media.

During the meet, he highlighted connectivity projects like Chahbahar, INSTC, regional air corridors which are leading to "economic gains and building trust" but pointed out that "connectivity must respect sovereignty and territorial integrity".

China's mega infrastructure programme China Pakistan Economic Corridor or CPEC passes through Pakistan Occupied Kashmir. This has been a cause of concern for New Delhi, which has consistently raised matter with Beijing.

On Afghanistan, Doval called the need to preserve gains made in last two decades in Afghanistan and give top priority to welfare of its people & extended full support to SCO Contact Group on Afghanistan, "which should be more active."

At the SCO meet, Doval had over 2 hours long meeting with Russian NSA Nikolai Patrushev during which issues of mutual interest were discussed.