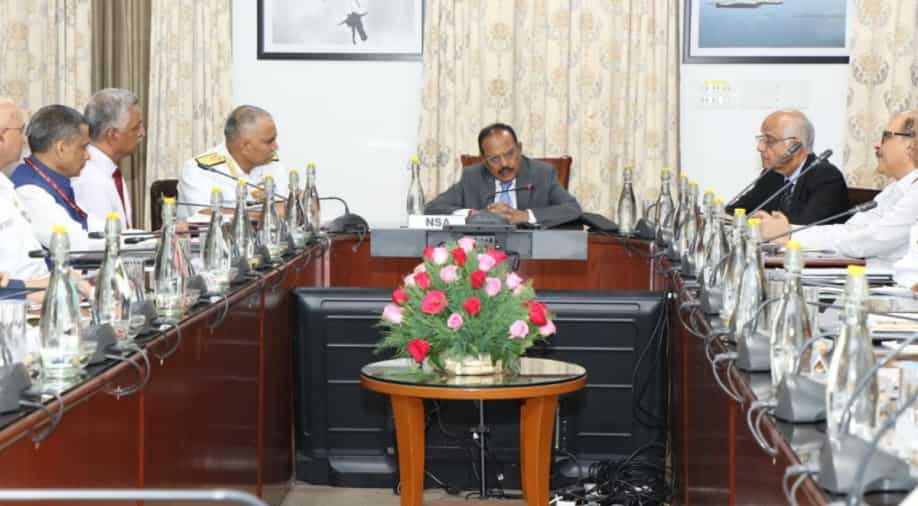 Highlighting that India has "very deep strategic interest & geo political interest", NSA said, "seas are areas of rivalry, adversities" and in the Indian Ocean region "India has a unique maritime advantage, it is the largest central state in Indian ocean region

India's National Security Advisor Ajit Doval has said that nations "cannot take unilateral decision in a maritime domain", comments that will resonate in the larger Indo-Pacific region where China is seen attempting to do that, especially in the South China sea.

Speaking at the first meeting of the Multiagency Maritime Security Group, NSA explained, "concept of sovereignty (in the maritime domain) is in a calibrated fashion where territorial waters are completely sovereign territory, but as we go to contagious zone, EEZ and further, further demarcation of rights and duties that we have as a nation, what we can do and cannot do".

On disputes, he said, while "disputes and settlement in land border are bilateral in the nation and are decided between two parties across the table," but when "we come to maritime, it's multilateral in construct, laws of seas which are not bilateral, UNCLOS. A nation cannot take a unilateral decision in a maritime domain, the process is complex".

Highlighting that India has "very deep strategic interest & geo political interest", NSA said, "seas are areas of rivalry, adversities" and in the Indian Ocean region "India has a unique maritime advantage, it is the largest central state in Indian ocean region. Its central geography places a very important role, its 1300 plus islands, economic potential, trade route pass through our area"

The Indian Ocean region has one of the busiest global trade routes, with energy flows going from West Asia to East Asia. 95% of Indian trade by volume is maritime and routed via 12 major and over 200 non-major ports. Over 90% of Indian hydrocarbon requirements are met through seaborne imports and offshore production. Increasingly, worries of illegal fishing, piracy and human trafficking have emerged. Since the 9/11 terror attack in Mumbai over 10 years ago, counter-terror is another focus area.

On India's outreach to neighbouring countries, he said, India's "seven important neighbours are critical to our maritime construct, their problem impact us and we also have an important role to play with them". India is part of the Colombo security dialogue and under the Indian Ocean Rim Association has been trying to form a consensus over issues in the region.

In his remarks, emphasising the salience of maritime security in an increasingly complex and challenging landscape, the NSA underscored the need for seamless coordination. In a major decision to reform coordination of maritime security affairs at the apex level, in November last year, the Cabinet had approved the creation of the post of NMSC, under the NSA, at the National Security Council Secretariat.

He particularly pointed out, "India's time will come. We as a nation need to be strong, coastal security and maritime will play an important role in this".

In the last few years, the Indian Government has given special attention to the maritime domain with initiatives like SAGAR initiative in 2015, the announcement of India's Indo-Pacific Policy in 2018 as well as growing focus on the blue economy.