Nipah virus: Sample of fruit-bats sent for testing as death toll mounts to 14 in Kerala 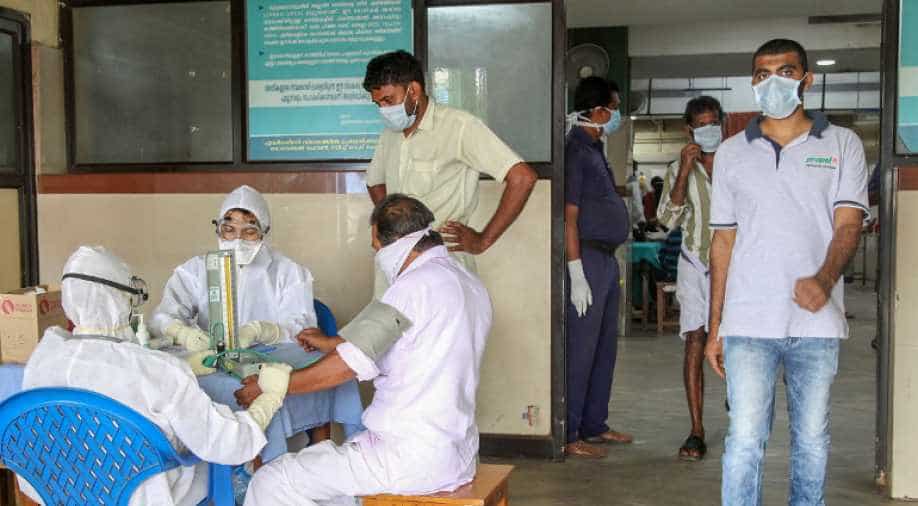 Doctors and patients wear safety masks as a precautionary measure after the Nipah virus outbreak, at a Medical college in Kozhikode. Photograph:( PTI )

As the death toll from deadly Nipah virus in Kerala has mounted to 14, samples of fruit-eating bats from Perambra would be sent for lab testing. Perambra town, located in the Kozhikode district of Kerala, is believed to be the epicentre of the Nipah virus. Fruit-eating bats are known as the primary hosts of the virus.

According to reports, samples of fruit-eating bats will be sent to the National Institute of High Security Animal Diseases (NIHSAD) in Bhopal.

Experts from the National Institute of Virology, Pune and departments of Animal Husbandry and Forest have begun collecting the samples which would be sent to NIHSAD to test for the presence of the virus in the fruit-eating bats, Dr N N Sasi, Director Animal Husbandry, told PTI.

Earlier, samples of three bats -- caught from an unused well of the Moosa family which lost three members to Nipah virus -- were sent to the Bhopal laboratory for testing. Other samples from pigs, goats and cattle in the 5-kilometre radius of the affected area were also sent; all samples were tested negative.

"We are trying to catch fruit-eating bats from the Perambra region now," Sasi said.

According to an official, the droppings, urine and secretions of the bats will also be sent for testing.

A Union Health Ministry advisory has said that the virus, which commonly affects animals such as bats, pigs, dogs, and horses, can spread to humans and cause serious illness. Spread of the virus to humans may occur after close contact with other Nipah infected people, infected bats, or infected pigs.

Fruit sellers in Kerala have faced the brunt of the deadly Nipah virus. They say their incomes have been reduced as customers fear that fruits might be infected with the virus.

A fruit seller, Sulfi, told ANI, "Even though we are selling at half of the usual price, no one is willing to buy."

The death toll from the deadly Nipah virus on Sunday rose to 14 in Kerala after one more person died in Kozhikode. Most of the deaths reported are from Kozhikode and Malappuram districts.

The state government has also issued an advisory, asking travellers to avoid visiting the four districts of Kozhikode, Malappuram, Wayanad and Kannur.