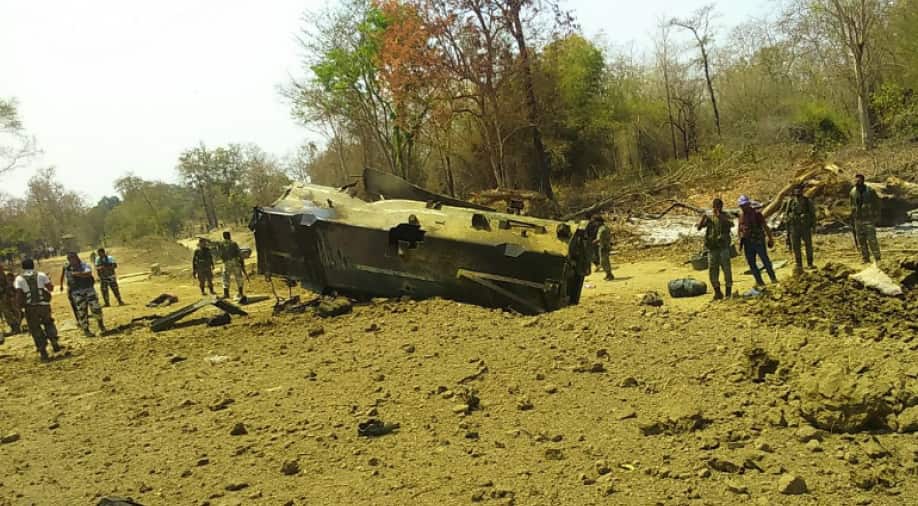 The rebels used a lot of explosives to blow up the vehicle, an official said. Photograph:( ANI )

At least nine CRPF personnel were killed and three others injured when Maoists blew up an anti-landmine vehicle in Sukma district of Chhattisgarh on Tuesday, said a senior police official.

Talking to media, Special DG, Anti Naxal Operations, DM Awasthi said the security force has reached the spot and no firing has been reported at present.

"A patrolling party was going from Kistaram to Palodi in an anti-landmine vehicle which was targeted by Naxals with an IED. The extra force has reached the spot, there is no firing at present," he said.

My heartfelt condolences to the families of those personnel who lost their lives in Sukma blast. I pray for the speedy recovery of the injured jawans. I spoke to DG CRPF regarding the Sukma incident and asked him to leave for Chhattisgarh, tweets HM Rajnath Singh. (File Pic) pic.twitter.com/43BxXvofth

The Naxals attacked the 212 Battalion of the Central Reserve Police Force (CRPF).

The CRPF personnel were carrying out an area-domination operation in the area when their mine-protected vehicle (MPV) was reportedly blown up.

The blast also injured few CRPF personnel, who have been evacuated by helicopter to Raipur for medical treatment.

SK Sood, Former DG, BSF on Sukma attack said,''CRPF has been repeatedly suffering big losses in this area, this means the CRPF authority is not taking remedial action, we should learn from mistakes.''

#CRPF has been repeatedly suffering big losses in this area, this means the CRPF authority is not taking remedial action, we should learn from mistakes:SK Sood,Former DG,BSF on Sukma attack pic.twitter.com/yO095OenQA

Last April, in the biggest Maoist attack on CRPF personnel in Chhattisgarh in the last seven years, 25 jawans were killed and six injured in an ambush in the Burkapal area of Sukma.