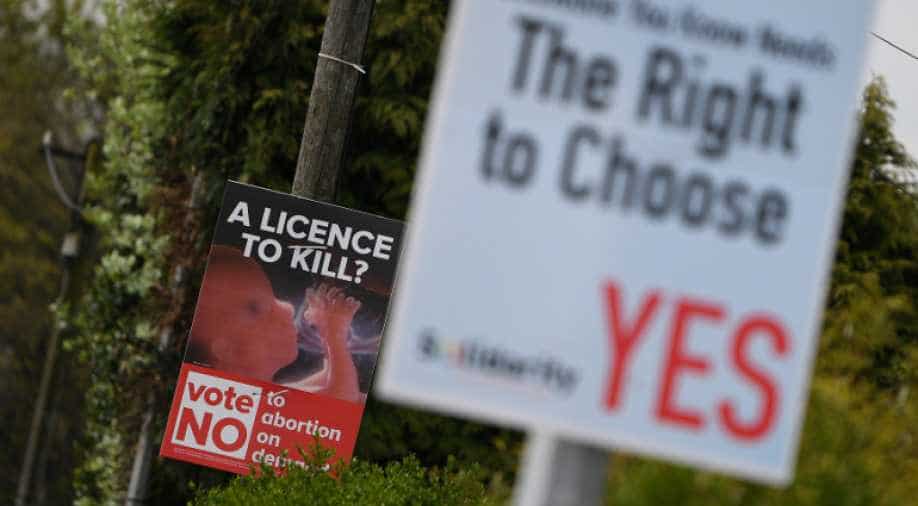 Pro-Life and Pro-Choice posters are seen outside the home of Amy Callahan who received a fatal foetal diagnosis at 12 weeks into her pregnancy and travelled to Liverpool for a termination in Dublin, Ireland, May 7. Photograph:( Reuters )

When people are dying on the border, dialogue is not appropriate: Sushma Swaraj on Pakistan

External Affairs Minister Sushma Swaraj addressed an annual press conference on Monday in which she highlighted the achievements made by the Modi government over the past 4 years.

A retired English teacher from the United States did not give any consideration to the fact that the letter she had received, had come from the White House and after being astounded by the grammatical mistakes made the rightful changes and sent it back.

Ireland abortion law may be termed as 'Savita's law'

After Ireland welcomed the abortion vote, campaigners have said that they will be in full support if the new law will be named after the woman who died after miscarriage - Savita Halappanavar.

Iranian Foreign Minister Dr Mohammad Javad Zarif, who arrived here on Monday on a one-day visit, stressed upon the idea of strengthening relations shared by the two countries.

Pakistan's military Monday took the unprecedented step of preventing a former spy chief from leaving the country, after he ignited a storm by co-authoring a book that touches on Pakistan's alleged roles in Afghanistan and Kashmir.