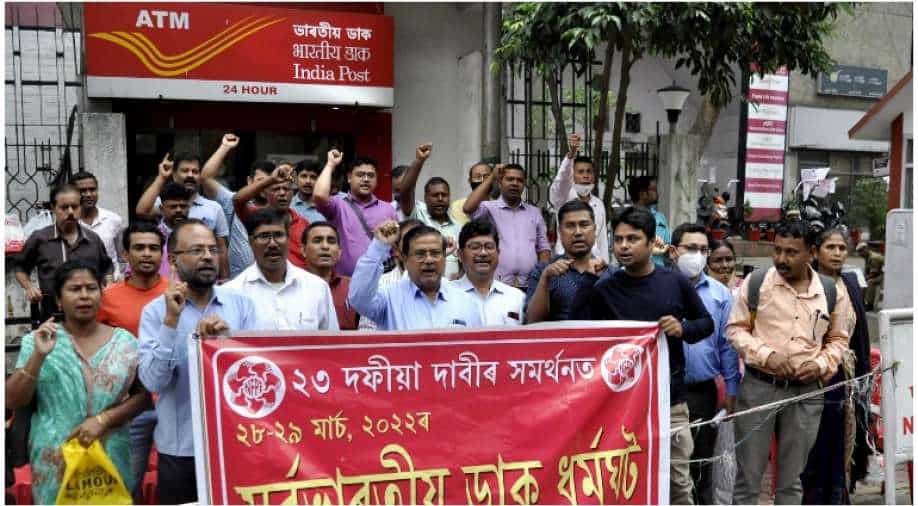 Trade Union members raising slogans stage a protest during the second day of the nationwide strike (Bharat Bandh) against the Central Government over its policies allegedly affecting farmers and workers, in Guwahati on Tuesday, March 29, 2022 Photograph:( ANI )

Although the strike had been called on a national level, there were no reports of any widespread disruption in the daily lives of citizens barring in a few pockets of the country

The New York Times has drawn the ire of Twitter users, especially in the Indian Twitter space for its coverage and characterisation of the general strike.

National trade unions in India have called for a two-day general strike beginning on Monday (March 28). On the same day, NYT published a story with the headline 'General strike throws India into confusion'.

1. Rolling back proposed changes to the labour law

Although the strike had been called on a national level, there were no reports of any widespread disruption in the daily lives of citizens barring in a few pockets of the country.

In most other parts of the country, cars were moving freely on the roads, trains were plying as usual and government offices were functioning as usual.

There were no reports of mass rallies from these regions, there was no violence and certainly no 'confusion' as the NYT chose to put it.

The NYT report has quotes from two people of which one is a communist party member and the other is a trade union representative. The report did not have any comment from the government, no response from an official.

The report said, "...In Kerala, in the south, streets were empty and shops shuttered..."

However, the report does not mention that Kerala High Court had barred government employees from taking part in the strike.

The New York Times' coverage of the strike has had many Indians expressing their displeasure on Twitter.

Been 19.5 hours since Monday started in India. Still can't see a strike. Please help me find one 🙏

It is not that NYT has not attempted to gauge the intensity of protests around the world.

An NYT headline on March 9 read "Trucker convoy near Washington, D.C., is a low-key protest".

But when it came to India, a strike that was not widespread was seen to have "spared no corner of India"