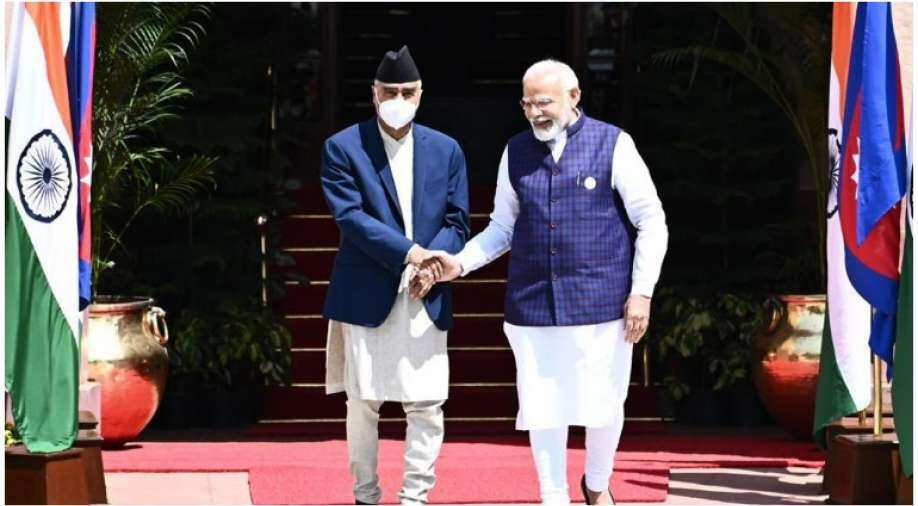 The Nepalese prime minister, accompanied by a high-level delegation, arrived in New Delhi on Friday on a three-day visit.

On the second day of PM Sher Bahadur Deuba's official India visit, the two countries have had an exchange of agreement on the operationalisation of the 35 km long cross-border rail link between Jayanagar in Bihar and Kurtha in Nepal.

The use of the Indian RuPay card in Nepal was jointly launched by the two prime ministers. This would open new vistas for cooperation in financial connectivity, and is expected to facilitate bilateral tourist flows as well as further strengthen people-to-people linkages between India and Nepal.

PM Deuba said that India is making progress under the visionary leadership of PM Modi.

“I truly admire your love and affection for Nepal and the Nepali people and my visit today will further enforce these innate sentiments,” he said

“We had friendly talks and fruitful discussions on various aspects of India-Nepal relations. We shared our perspectives on further strengthening our friendly ties,” he added.

Prime Minister Modi welcomed Nepal’s decision to join the International Solar Alliance (ISA), with Nepal, becoming the 105th country to become a signatory to the Framework Agreement of the ISA.

“Held fruitful discussions with PM @SherBDeuba, who has always played a key role in boosting the India-Nepal friendship. We took stock of the full range of bilateral relations including important development projects that will deepen economic as well as cultural linkages,” PM Modi said in a tweet.

“One of the key emerging pillars of India-Nepal cooperation is energy. PM @SherBDeuba and I talked about augmenting cooperation in the power sector. I also welcome Nepal’s decision to join the International Solar Alliance,” he added.

PM Deuba thanked Indian PM for standing by Nepal during the Covid pandemic.

Modi gifted a traditional 'Pahari School' miniature painting from Himachal Pradesh to his Nepalese counterpart during the meeting between the two leaders.

The exquisite traditional painting depicts the season of 'Shravan' or Monsoon which falls during the months of July and August.

It is tradition for Nepalese prime ministers soon after taking over office to visit the southern neighbor India, which has always had major political and economic influence over Nepal.

The visit is seen as an opportunity for Deuba to renew relations with Indian leaders and also for Indian leadership to try to regain their clout.

Since Deuba’s appointment as PM, several high-level visits of senior officials, dignitaries, and even members of ruling parties of both countries have taken place.

In October, a three-member delegation of the Nepali Congress led by head of the party's international department Prakash Sharan Mahat visited India leading to the opening of an informal channel and party to party engagements as well.