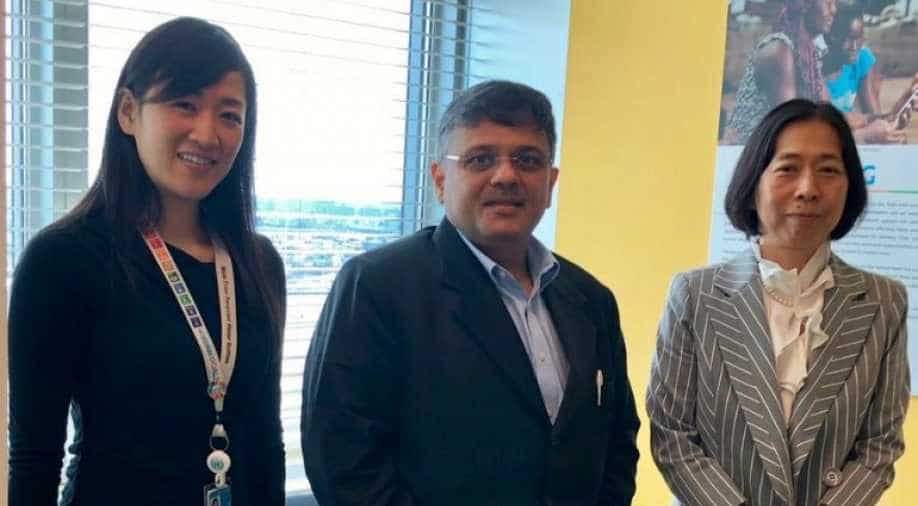 Desai is an adviser to the Department of Persons with Disabilities in India’s Ministry of Social Justice and Empowerment and was also appointed an adviser to the ‘Accessible India’ campaign aimed at making transport, public spaces and information and communication technology accessible to differently-abled people.

Pranav Desai, an Indian American IT Professional, showcased his much talked about creation- a mobile application for people with disabilities, at the United Nations recently. The app will help create mass awareness and inspire everyone including government officials, the business community, the youth and the specially abled themselves in efforts to ensure a life of dignity and equality. Desai himself is a polio-survivor and is the founder of the Voice of SAP (Specially Abled People). Desai spoke to WION with his team in an exclusive interview where he mentioned his mission and vision behind the campaign.

Desai is an adviser to the Department of Persons with Disabilities in India’s Ministry of Social Justice and Empowerment and was also appointed an adviser to the ‘Accessible India’ campaign aimed at making transport, public spaces and information and communication technology accessible to differently-abled people.

In this chat with us, Mr Desai and his colleague Manushri mentioned how important the aspect of accessibility of buildings are for people with disabilities and how helpful the campaign of Accessible India and the mobile app can prove to be for India and across the world.

The following excerpts are from the interview with the team:

What made you think about this App?

Pranav Desai: The basic need from our perspective is the accessibility. Because if the person has access to the school, he or she can do very well, which is why we made accessibility as our core theme at VoiceOfSAP. This is why we proposed Accessible Campaign to Govt Of India which was fortunately launched by Prime Minister Modi in 2015, 3rd International Disability Day. The key aspect of the campaign is creating the demand for accessibility, create the awareness and that is where the technical tool like VOSAP app is very very useful because we are empowering people to be advocates for the accessibility. The idea was to empower every individual who wants to help create accessibility. People can plan using the VOSAP app to track places of need like post offices, restaurants, etc. There is independent living. The whole idea was to provide information and empower volunteers to speak for them.

Manushri Desai: I was able to join Voice of Specially Abled People after Mr Pranav Desai had begun working on the application. My role in the application dealt mostly with expanding its community outreach to my secondary university based in California, the University of Southern California until I was able to work more closely to increase our outreach and community of disability rights activist. But I wasn't directly involved in the founding of the app.

How accurate is the app and did you get any feedback from the users as well?

Pranav Desai: For accuracy, we are using Google, Apple and various APIs so the mapping is driven by the latitude and longitude of the location which is captured by any smartphone. Of course, depending on various smartphones there could be some variations. However, we are very close in the precision of capturing the location which is what we are putting back on the Google map. It is very useful too, as there was never such an advocacy tool before. this kind of database is non-existent. As a matter of fact, more and more people like it and thousands of photographs are being taken, more and more communities are joining this movement and we have 8000 passionate volunteers. That's the success, in 3 years from zero to 8000 volunteers on the ground have been convinced to put their efforts to create a more inclusive society.

Manushri Desai: I think one of the very interesting parts of the application is the accessibility part of the app and that allows anybody in a respective community, any volunteer to take a picture of a building and rate its accessibility and then also be able to write specific comments about the accessibility of the building and take a picture of the building, that goes into a crowdsourcing database where people with disabilities in different areas of the world can access those photos and be able to use them to see which buildings are accessible to them. In that instance, I think it's been pretty accurate to which buildings do have accessibility and which buildings don't. The feedback that we get from the users is that they are able to navigate it well in the sense of the crowdsourcing aspect of the database and they are also able to locate buildings through the application very well from the point of view of persons with disabilities.

How does App work? Could you also elaborate on the methodology it uses?

Manushri Desai: There are three key features of the application. The first being it allows everyone to become a disability rights activist by taking the volunteering plunge. This is based on their role in the society which they can select in a drop-down menu. They use this basically to establish their individual social responsibility towards people with disabilities. It's really about committing to actions towards people with disabilities demonstrating empathy rather than sympathy. This way we want to create a mass movement worldwide. Anybody can join the group of the like-minded society of people that are willing to help disability rights advocacy.

The third major key feature is empowering our youth. Volunteers who can become change agents in the community. So these buildings which are rated by our volunteers, if they are not accessible in certain parts of the world then this key feature allows volunteers to email directly from the mobile app to the owner of the building and to reach out to them about changing the building to become more accessible for people with disabilities. It allows us to map our community locally also advocate the increase of accessible buildings around the world.

What is the status of your plea with the government of India?

Pranav Desai: We shared this proposal of Accessible India Campaign to Prime Minister Modi back in 2014, which is now a reality. So we believe on the ground we have created an impact. We have signed with 2 districts of Ahmedabad and Morbi in Gujarat, Our biggest suggestion or request to every District Magistrate to join with us and commit that their district would be mapped out completely for accessibility of the buildings. Our biggest request to the govt is every collector should promote and take action to map out their districts for all important buildings using VOSAP mobile app.

Manushri Desai: Right now the application has been helping the Accessible India Campaign. My colleague and I were able to attend the United Nations Conference very recently for the rights of persons with disabilities and the role of VoiceofSAP right now is working on the Accessible India campaign and basically using its crowdsourcing data to expand our community of accessibility of buildings in India and to be able to map that out.

How soon users will be able to use the app in India?

Manushri Desai: I think they can start using it right now. I joined VoiceOfSAP last year and I've become extremely accustomed to the application and I know many people I've been able to reach out to through my work. It's very user-friendly and it just requires a little role as taking a pledge, making sure you join the group of like- minded people to become a disability rights activist but to also be engaged in the community by taking pictures, rating accessibility of buildings and advocating for the accessibility. So especially in India, there has been a mass movement created by VoiceOfSAP and this application will be a trailblazer in establishing that mass movement.

How does it feel to bring a positive change in many people life?

Manushri Desai: It's very satisfying and I think it's not just because we interact with these people through this mobile app interface but it's knowing that there are 8000+ volunteers that are involved in this push towards this atmosphere creation around the world. Knowing that is not a feeling that can be explained by words. hence I feel privileged to be a part of this movement.

How do you see the app response?

Manushri Desai: The 8000+ volunteers are a testament to the fact that the app has started to create a mass movement and many of the people we spoke to at the UN Conference also spoke to a similar degree about how important the application is.