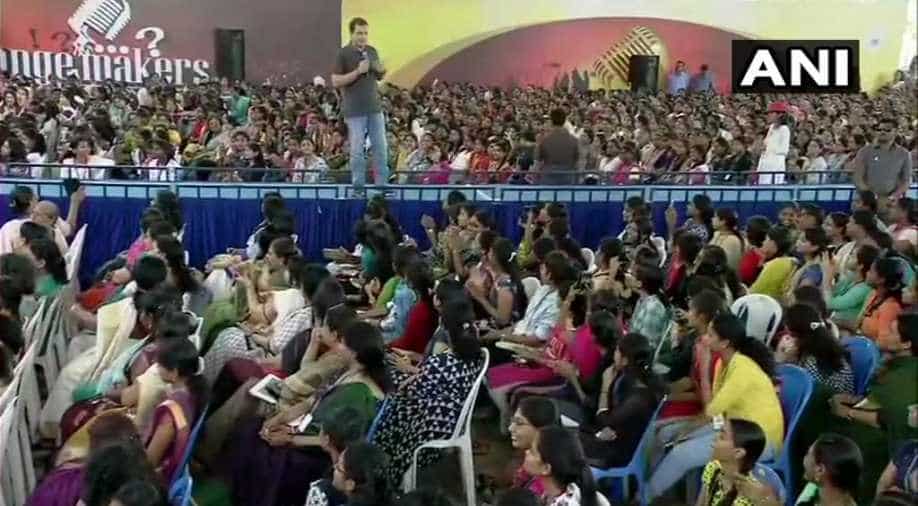 Rahul Gandhi was addressing a gathering of students at Chennai's Stella Maris college.

"We want to take the money that is going to 15-17 corrupt business people like Narendra...not Narendra, Nirav Modi and open the banking system to entrepreneurs like yourself," Rahul Gandhi said while talking about rampant corruption taking place in the country.

Rahul Gandhi was addressing a gathering of students at Chennai's Stella Maris college.

During his informal interaction with the students, he also brought up the issue of the Rafale deal and reiterated his allegations about the pricing of the aircraft and the process.

"I will be the first person to say it... Investigate Robert Vadra but also investigate Prime Minister Narendra Modi," he said.

Modi is a "corrupt" man, he bypassed negotiations and ran parallel negotiations on the Rafale deal, Gandhi alleged while responding to the question.

The Congress chief said the prime minister should have the guts to face the media and asked why Modi was "hiding".

The BJP and the government have repeatedly rejected Congress's allegation of corruption in the Rafale fighter jet deal.

When the audience answered, "No", he said, "I think it's pretty clear the damage demonetisation did. PM should have taken your advice."
Gandhi, who asked the students to challenge him and "make him uncomfortable", also questioned whether the prime minister could stand in a large audience and answer people's questions.