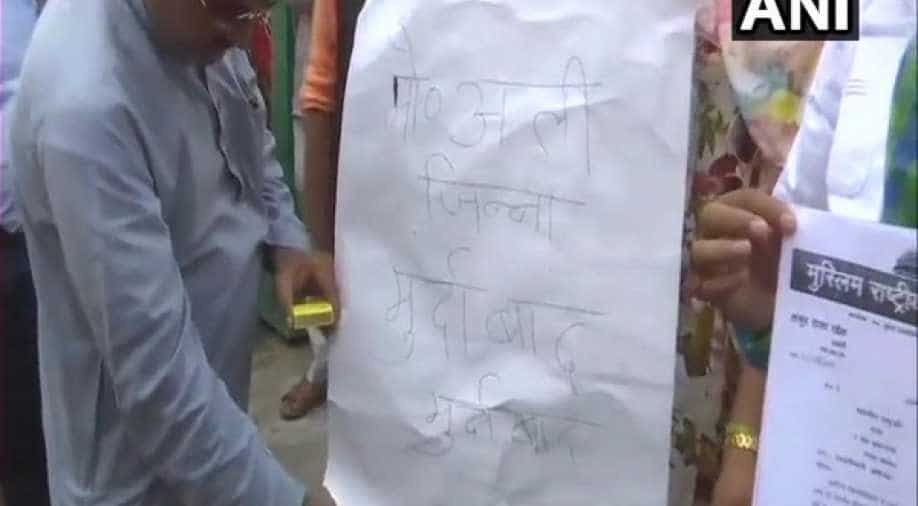 Muslim organisations on Saturday burnt 'anti-Jinnah' posters outside BJP office in Lucknow in protest against the portrait of Muhammad Ali Jinnah in Aligarh Muslim University (AMU).

The police seized an effigy of Jinnah from them.

Earlier, internet services were suspended in Aligarh district in the wake of unrest in AMU after the Jinnah portrait row.

Tension prevailed in Aligarh and students continued with their sit-in at the university's Baab-e-Syed gate, where they had clashed with the police on Wednesday.

They are boycotting classes for the next two days.

Wednesday's clash took place when the students were demanding action against right-wing protesters who entered the campus and wanted the Pakistan founder's portrait removed from the student union office, where it has been hanging for decades.

The University said portraits of all life members of the student union hang there. Jinnah, a founder member of the University Court, had also been given this honour before Partition.

AMU vice chancellor Tariq Mansoor today visited the Jawaharlal Nehru Medical College Hospital where three of the students injured in the police lathi-charge are being treated.

Also, the national head of All-India Muslim Mahasangh on Friday announced a reward of Rs 1 Lakh for destroying Jinnah's posters.

Speaking to ANI, Farhat Ali Khan said that no organisation in Pakistan must be having photos of Indian leaders who fought for independence, and the vice versa should be followed in India.

"I appeal everyone to tear and burn down posters of Jinnah and people like him. I announce a reward of Rs 1 Lakh cash for the one who burns down the poster," Khan said.