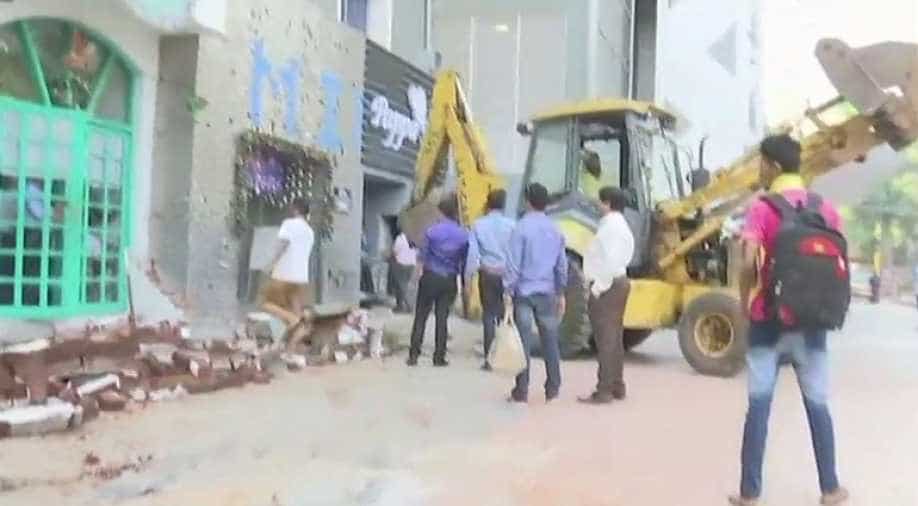 The Brihanmumbai Municipal Corporation (BMC) initiated an inspection drive of 624 restaurants, eateries and malls across the city. Photograph:( ANI )

In a major crackdown, civic officials in Mumbai on Saturday demolished illegal structures at 314 sites and sealed seven hotels, a day after a blaze in an upscale pub claimed 14 lives.

The Brihanmumbai Municipal Corporation (BMC) initiated an inspection drive of 624 restaurants, eateries and malls across the city and its suburbs and razed illegal, unauthorised structures at 314 sites, the civic body said in a release.

"The BMC has sealed seven hotels and seized around 417 LPG cylinders during the action," it said.

Meanwhile, a senior police official said lookout notices were on Saturday issued against Hitesh Sanghvi and Jigar Sanghvi, co-owners of '1 Above', the ill-fated Lower Parel pub where the fire took place. It was run by 'C Grade Hospitality'.

The police had on Friday booked the Sanghvi brothers, another co-owner Abhijeet Manka and others in connection with the case.

Giving details of the inspection drive, BMC spokesperson Ram Dotonde said as many as 1,000 officials and employees of the civic body had hit the streets and become a part of the exercise.

"The unauthorised hotels and restaurants, not only in central Mumbai, but also those located in the distant suburbs, such as Malad and Mulund, are facing action," Dotonde said.

A major portion of the popular Zaffran Hotel, located opposite the police headquarters in south Mumbai, was removed, he added.

"There are 24 wards in Mumbai and each has three teams personally inspecting all the restaurants, pubs, food joints and eateries. Each team has 10 members, including officials from the health and administration departments and inspectors," he said.

Once the team finds an unauthorised structure, it is brought down immediately, Dotonde said.

The civic administration has asked its entire staff to remain on duty. Leave and weekly offs of the staff of several departments, including the anti-encroachment department, have been cancelled and they have been given a detailed list of restaurants and pubs, where violations were found during the preliminary inspection, he said.

The other areas where the drive was carried out included Shivaji Park, Mulund, Dahisar, Malad, the Parsi Gymkhana near Marine Lines, Grant Road, Andheri and Ghatkopar.

The civic body has also directed its officials to form teams to ensure that restaurants and bars follow the safety norms, in view of the New Year parties.

Early in the morning, the civic teams removed the illegal roofs of two restaurants -- "Skyview Cafe" and 'Social' at Kamala Mills as also encroachments of "Pranay", "Fumes" and "Sheesha Sky Lounge" at Raghuvanshi Mills in the same locality, BMC officials said.

However, a spokesperson from the Social restaurant said in a late night clarification that it had faced no such action, and there was probably a "miscommunication" by the civic authorities.

The teams will inspect all the restaurants in their respective wards and ensure that they are fire-compliant, the message said.

The premises should have fire-escape routes, staircases and open spaces, free from encroachment, it added.

After the blaze, the BMC had on Friday suspended five officials for "dereliction of duty".

A fire brigade official said they were trying to ascertain what exactly had triggered the inferno.

"We are probing if the flames created during a fire-stunt by a bartender at the pub came in contact with plastic sheets that covered the bamboo structure and triggered the blaze. We are also trying to find out whether the burning coal used for hookah at the adjacent restaurant led to the tragedy," he said.

"We are also taking into consideration all other possibilities, including that of a short-circuit," he added.

The massive fire that had swept through the pub left 14 people dead and 21 injured. The same central Mumbai area -- a former textile mill district, now dotted by swanky glass-and-concrete towers -- had witnessed the death of 23 people in a stampede at a railway over bridge on September 29.