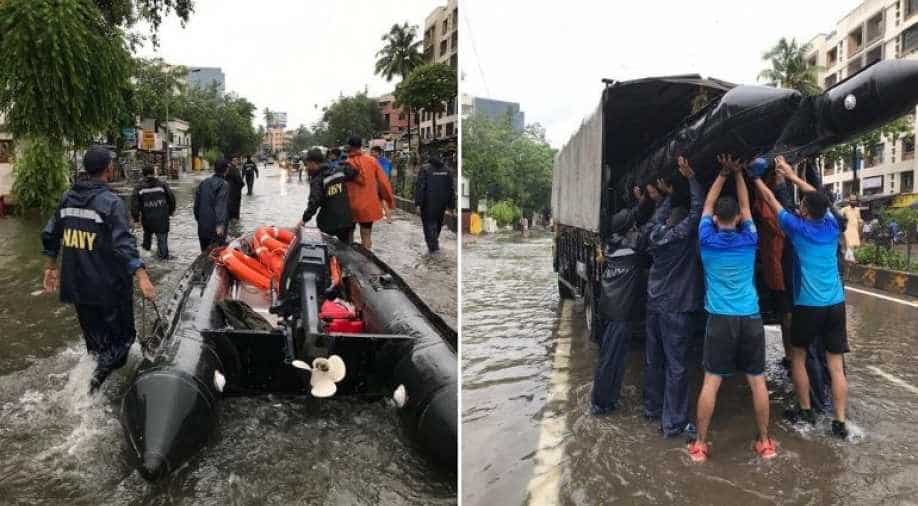 The state government has declared a public holiday and advised people to avoid stepping out of their houses. Several subways and roads have been shut due to water logging and flooding.

Mumbai, which has been pounded by incessant rainfall on Tuesday, has recorded the second highest rainfall in the last 45 years causing accidents that claimed the lives of over 20 people in a wall collapse in Malad in the city with several areas of the city waterlogged and throwing traffic out of gear.

More rain is predicted between July 3 and 5 with close to 200 mm or more rain expected per day, according to the IMD.

"Second highest rainfall in 45 years. Entire June month's average rainfall was recorded in just three days in Mumbai," Chief Minister Devendra Fadnavis said in a statement to the Maharashtra Assembly today according to a tweet put out by the CMO Maharashtra.

Mumbai received 550 mm of rainfall over a period of two days, the average of the entire month of June has been exceeded in just last 48 hours.

The state government has declared a public holiday and advised people to avoid stepping out of their houses. Several subways and roads have been shut due to water logging and flooding.

A BEST buses got submerged in the water and faced damaged and breakdown at Andheri subway.

At Kings's Circle area of Mumbai, police and Brihanmumbai Municipal Corporation (BMC) workers came forward to help the people riding two-wheelers to cross waterlogged roads due to heavy rains.IMD has predicted, "Intermittent rain in city and suburbs, with heavy to very heavy rainfall at a few places" for the next 24 hours.

IMD has also predicted an improvement in the weather situation in Mumbai.

"In the last 24 hrs Colaba received 13 cm rain, Santa Cruz received 37 cm rain. From 11.30 pm-5.30 am, more than 200 mm was recorded. The situation is gradually improving, we have brought down the warning by one level. Isolated heavy rainfall is expected in Mumbai today," said KS Hosalikar, Deputy Director General (DDG), IMD Mumbai.

"Heavy to very heavy rainfall is expected in Thane & Palghar today. There will be an improvement in the situation in Mumbai after the noon today," he added.

Around 54 flights were diverted to the nearby airports and 52 flights were cancelled as heavy rains continue to lash Mumbai and its neighbouring areas, an airport official said on Tuesday.

After taking the stock of the situation in and around Mumbai, the state government has declared July 2 as a public holiday, due to extreme rains and waterlogging issue.BMC commissioner Pravin Pardeshi has directed all the ward officer to reach their office and monitor the flood situation.

The Central railway has also suspended the movement of suburban trains, citing safety hazard. The Railways said the state government and various other agencies have been requested to run extra buses between Mumbai and Pune for intercity travellers.