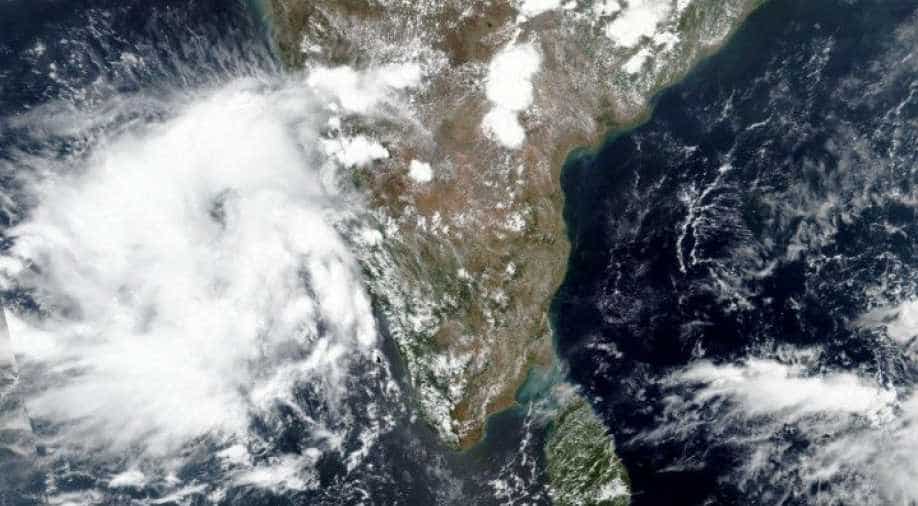 Nisarga will make landfall as 'severe cyclonic storm' close to Alibag, 94 kms south of Mumbai on Wednesday afternoon with a wind speed of 100-110 kmh gusting to 120 kmh. This is perhaps the first such storm to threaten Mumbai in more than 70 years.

Cyclone Nisarga is fast approaching the northern coast of Maharashtra with a speed of 11 kilometres per hour, according to the India Meteorological Department (IMD). Nisarga will make landfall as 'severe cyclonic storm' close to Alibag, 94 kms south of Mumbai on Wednesday afternoon with a wind speed of 100-110 kmh gusting to 120 kmh.

This is perhaps the first such storm to threaten Mumbai in more than 70 years.

To this end, the Mumbai Police has imposed Section 144 in the city -- which will be in effect till Thursday afternoon. The police has also banned citizens from visiting places like beaches, parks and promenades along the coastline.

Maharashtra and Gujarat have evacuated more than 1,00,000 people from coastal areas, especially those staying in slums and makeshift houses to places of shelter, officials from both the states said.

In Mumbai, authorities shifted 150 patients from newly built makeshift Covid-19 hospital to other hospitals as the new structure was located in low-lying area.

The weather forecast agency further said that at 4:30 am the wind speed had increased to 22 kmph at Santacruz in Mumbai. It has also predicted that light to moderate rainfall would take place at most places with isolated heavy falls very likely over coastal Karnataka and Marathawada during the next six hours.

After the landfall, the 'severe cyclonic storm' is likely to maintain its cyclonic storm intensity for about six hours while moving north-northeastwards across North Madhya Maharashtra.
Under its influence, gale wind reaching 60-70 kmph gusting to 80 kmph is very likely to prevail over Pune, Ahmadnagar and 55-65 kmph gusting to 75 kmph adjoining Beed, Nashik and Aurangabad districts of Maharashtra.

The IMD had earlier stated that the Severe Cyclonic Storm is expected to impact the Maharashtra coast by the afternoon/evening of June 3.

In view of impending Cyclone Nisarga, Mumbai Police Commissioner Param Bir Singh has issued prohibitory orders restricting any presence or movement of persons in public places along the coast on Tuesday.

The prohibitory orders will remain in effect from midnight of Tuesday to 12 noon Wednesday, as per the statement.

NDRF Director General SN Pradhan, to this end, said that ten teams were deployed in Maharashtra and 11 in Gujarat. Five more NDRF teams were sent to Gujarat and Maharashtra respectively for joining the ongoing operations.

Nisarga comes close on the heels of Cyclone Amphan which killed more than 100 people when it hit eastern India and Bangladesh in May, flattening villages, destroying farms and leaving millions without electricity.

Keeping the cyclone in consideration, only 19 flights, including 11 departures and eight arrivals, will be operated from the Chhatrapati Shivaji Maharaj International Airport (CSMIA) on Wednesday.

According to GVK MIAL, which manages the CSMIA, the aforementioned flights will be operated by five airlines, including Air Asia India, Air India, IndiGo, GoAir, and SpiceJet.

The authority also cautioned passengers about probable changes in the schedule of the flights due to the cyclone and urged them to check with their respective airliners before leaving for the airport.

IndiGo Airline on Tuesday cancelled 17 flights to and from Mumbai.

"Due to severe cyclonic storm currently moving towards the country`s western coasts, IndiGo has cancelled 17 flights to and from Mumbai. IndiGo will only operate three flights from Mumbai on June 3, 2020," IndiGo said in a statement.

"The airline will operate three flights to Chandigarh, Ranchi and Patna from Mumbai on June 3, 2020," it further said.

All the passengers of the affected domestic flights have been notified."

At IndiGo, we are customer centric and have empowered our customers by offering PLAN B, sent to each individual, an option of re-booking on alternate flight starting next day or to protect PNR as credit account," it said.

Vistara also cancelled its flights scheduled to and from Mumbai on June 3 due to the warning of severe storm on the western coast.

"Following the warning of a severe storm that Cyclone Nisarga may cause on the western coast of India, Vistara has cancelled its flights scheduled to and from Mumbai on 3 June 2020. Affected customers are being informed of the cancellations and will be offered alternative flight options. Safety of our customers and staff is most important to us," Vistara spokesperson said in a statement.

Meanwhile, CSMIA convened a meeting with its stakeholders to devise preventive measures to tackle potential adversities accompanied by the cyclone.

CSMIA has undertaken various measures to safeguard the passengers and airlines at the airport.

Preventive checks at different airport functions have been carried out and the airport has ensured that DG sets are in place to provide the uninterrupted power supply. Water pumps have been positioned across the airport to clear water in case of waterlogging.

Furthermore, food and beverage counters will be operational 24x7 at the airport for passengers. These counters will continue to operate the safety measures adopted against ongoing pandemic."

A dedicated team has been placed on standby at the airport to assist in this wary situation. Some of the measures undertaken by the airport include efficient personnel management to account for the possibility that the relieving team might not be able to reach the airport to take over their shift. Logistical supports like vehicles, food and tea/coffee have been arranged," CSMIA said in a statement.

Also, the Central Railways has rescheduled eight trains which were supposed to arrive or depart from the state capital on Wednesday. The timings of 02542 LTT-Gorakhpur, 06345 LTT-Thiruvananthapuram, 01061 LTT-Darbhanga, 01071 LTT-Varanasi, 01019 CSMT-Bhubaneshwar special trains which were scheduled to leave Mumbai area during daytime were changed to night.

Similarly, special trains from Patna, Varanasi, and Thiruvananthapuram, which were scheduled to reach during the daytime were regulated and will now arrive in Mumbai behind schedule.