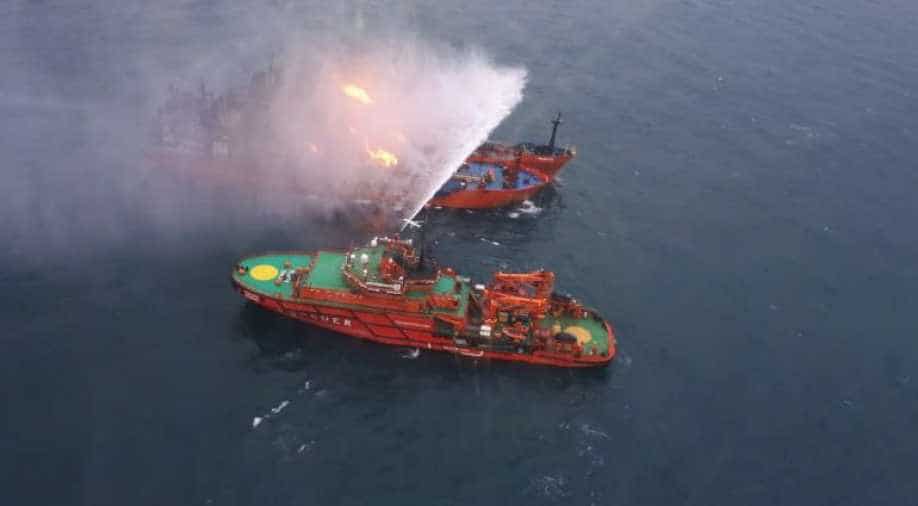 A rescue vessel tries to put out the blaze on one of the two ships that caught fire in the Kerch Strait off the coast of Crimea. Photograph:( Reuters )

The officials however did not say exactly how many of the 15 Indian sailors had survived the fire. They said instead that the information coming out from the accident site was limited.

A good number of the 15 Indian seafarers who are on-board the two ill-fated ships which caught fire off the Russian waters Monday have survived the accident, officials at the Directorate General of Shipping (DGS) here said Tuesday.

But the exact details, including the number of those who have made it, are not immediately available as information flow from the site is very limited, they explained.

The 15 sailors hail from different parts of the country but more details of them are awaited.

According to media reports, 14 sailors have died in the blaze on the two Tanzanian flagged vessels, but the nationalities of the victims are yet to be established.

A senior DGS official told PTI that dozens of vessels are looking for survivors in the vicinity of the accident site — the Kerch Strait separating the Crimea from Russia — and wreckage is very scattered.

"Some of our sailors have contacted their families back home about making it, while a few have been rescued after they jumped out of the blazing ships," the official said, declining to give an exact number.

The DGS has given a list containing all the details of the 15 Indian sailors who are on board these ships when they caught fire while transferring fuel Monday.

The DGS is in touch with both the foreign ministry in New Delhi, which is coordinating with the embassy in Moscow, while the Maritime Rescue Coordination Centre is in touch with its Russian counterparts, the official said.

The two ships have Indian, Turkish and Libyan crew and caught fire in the Kerch Strait that separates the Crimea from Russia, killing at least 14 sailors Monday, according to international media reports.

Both the vessels are Tanzanian flagged, and one of is an LNG carrier, the other is an oil tanker.

Fourteen people were killed in the accident, while 12 have been rescued, Sergei Aksyonov, an official of Crimean administration told reporters Tuesday adding while six are still missing.

The Kerch Strait is a key waterway that holds strategic importance for both Russia and Ukraine. It is an economic lifeline for Ukraine that allows ships leaving the port city of Mariupol to access the Black Sea.

It is also the closest access point for Russia to the Crimea, a peninsula Moscow annexed in 2014. A Russian-built bridge over the Kerch Strait was opened last May.