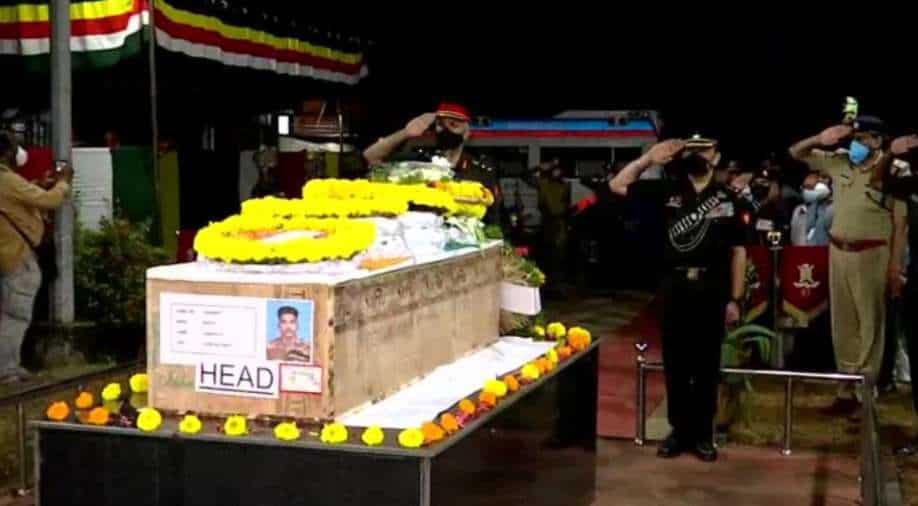 24-year old soldier Vaisakh H belonged to the Rashtriya Rifles battalion and was among the five soldiers who laid down their lives fighting terrorists in a gun battle in Poonch district of Jammu and Kashmir on Monday.

Mortal remains of braveheart Indian Army soldier Vaisakh H arrived at the Thiruvananthapuram airport in Kerala around 9pm on Wednesday.

The 24-year old soldier belonged to the Rashtriya Rifles battalion and was among the five soldiers who laid down their life fighting terrorists in a gun battle in Poonch district of Jammu and Kashmir on Monday.

He was 24, he joined the army when he was 19.. he asked for a #JammuKashmir posting 😔🙏 #NeverForget #Indian #ARMY #Veer #Soldier #Kerala pic.twitter.com/6xwKhsstTF

The inter-services procedure for paying last respects to the departed soul was held at "Shradhanjalisthan" at the remote car park adjacent to domestic terminal entry at the airport in Kerala's capital city.

The funeral of the deceased soldier, with full military honours would be carried out on Thursday at his native place in Kottarakkara, Kollam. The mortal remains are expected to be placed at the school in the village for common people to pay their final respects.

Vaisakh's life is one of unmatched grit and determination, he joined the Indian Army at the age of 19, right after completing his high schooling.

He was the first person in his family to serve the country's defence forces and was keen on joining the Army from a very young age. Serving the Indian Army for five years, he had recently asked for a posting in Jammu and Kashmir with full willingness to serve his motherland in the conflict zone.