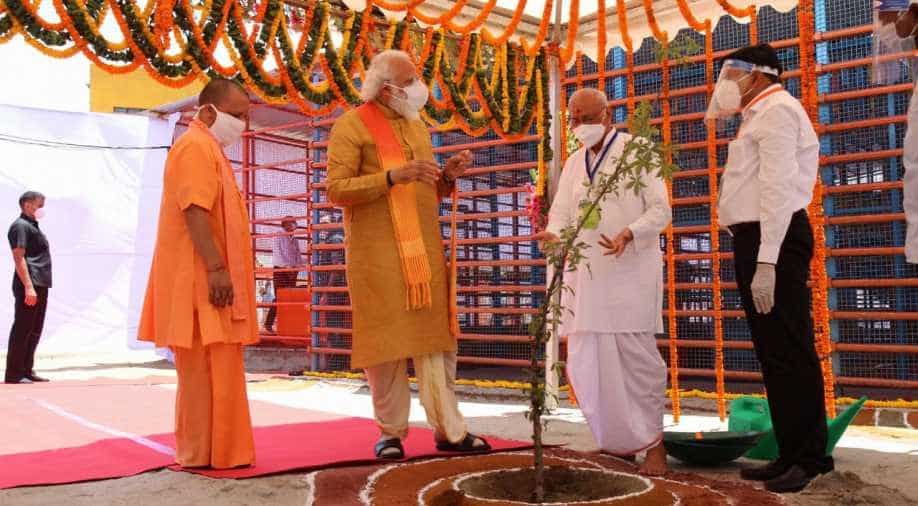 He placed a 40-kilo silver brick at the very spot, which Hindus believe to be the birthplace of Lord Ram.

August 5 will is a momentous day in India's history as Prime minister Narendra Modi laid the foundation stone for the grand Ram Temple.

He placed a 40-kilo silver brick at the very spot, which Hindus believe to be the birthplace of Lord Ram.

Prime Minister Narendra Modi, in his speech after laying the foundation stone, said: "Ram temple will become the modern symbol of our traditions. It'll become a symbol of our devotion, our national sentiment. This temple will also symbolise the power of collective resolution of crores of people."

Clad in a gold silk kurta and a dhoti -- Modi had to add a mask to his traditional attire. The venue and the surrounding areas were cordoned off to keep the crowd away and only invitees were allowed to enter the ritual arena.

At least 170 spiritual leaders were in attendance and scores of devotees watched on giant screens set-up across the city.

The idol was kept under a tent for more than three decades. It was moved to a make-shift temple earlier this year. The proposed ram temple will be double the size of the original plan.

It will be constructed in the Nagara style of architecture and, will stand over 160 feet in height.

For the foundation of the temple, 200,000 bricks inscribed with lord ram have been sent by devotees over the years.

Soil from 2,000 holy sites around India and water from 100 holy rivers will be used.

It will be a three-storey stone structure with multiple turrets, pillars and domes. The temple will have five domes instead of two to accommodate more devotees. 360 pillars will bear the weight of the domes. The project is expected to be completed in the next three years and, will cost at least 300 crore rupees.

Indians in the United States are in a celebratory mood. They went on a march chanting 'Jai Shri Ram' -- from the Capitol Hill to the White House. Temples in California, Washington, Texas and Florida have planned special rituals to mark the historic event.