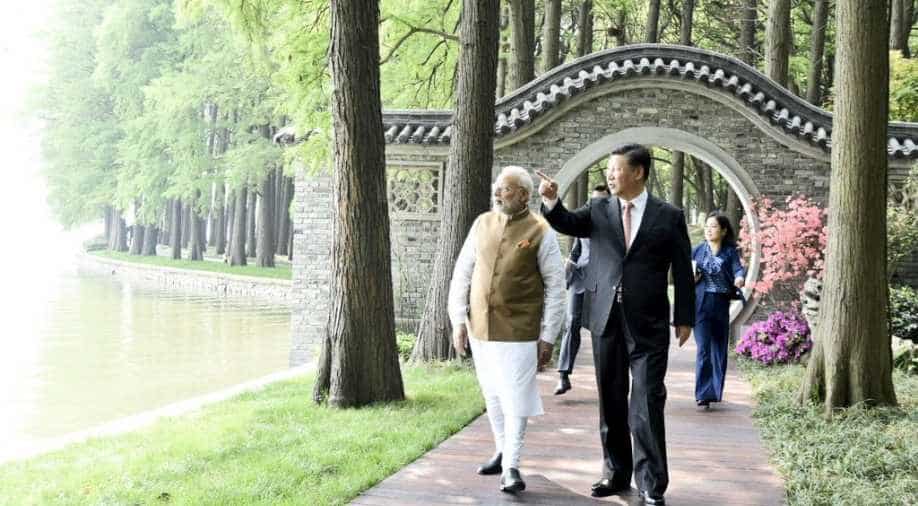 PM Modi and Chinese President Xi take a walk together along the East Lake in Wuhan today morning. Photograph:( Reuters )

On the second and last day of the informal summit, the two leaders were seen actively engaging with each other while walking by the lake.

Also, no aides were present with the two leaders.

The Ministry of External Affairs (MEA) spokesperson Raveesh Kumar captured the moment."Taking India-China relations on a forward-looking path, charting the future direction of the relationship! PM @narendramodi and Chinese President Xi take a walk together along the East Lake in Wuhan today morning," he wrote.

After the walk, Prime Minister Modi and President Xi will take a boat ride at the East Lake.The East Lake, a large freshwater lake in Wuhan city, is the largest urban lake in China.

It is one of the most popular tourist sites in the country, with over a million visiting the lake annually.

This will be followed by a private lunch hosted by the Chinese President in honour of Prime Minister Modi.At an event on Friday, Prime Minister Modi and President Xi were welcomed by a live band in Wuhan city playing an instrumental rendition of 1982 Bollywood hit song from `Yeh Vaada Raha` - `Tu, tu hai wahi, dil ne jise apna kaha.`

The Prime Minister, who is currently on a two-day visit to China, will depart for India on Saturday afternoon.

The two leaders yesterday held extensive talks amid the warmth and bonhomie.

They started the summit talks at the Hubei Provincial Museum where Xi took Modi around introducing the historic artefacts.

The museum walk scheduled for 20 minutes lasted over 40 minutes after which they began one-on-one talks.

The summit was stated to be unique as the two leaders have no pressure and obligation to strike any agreements nor make big announcements but focus mainly on candid discussions on solutions to some of the vexed problems like the boundary question and other issues.

Their one-on-one talks were followed by delegation-level interaction with six top officials each from both sides took part, giving an impression that some of the critical issues were on the table for discussion.

The delegation talks which apparently focussed on some of the most contentious issues lasted for over two hours overshooting scheduled half an hour, hinting the seriousness of the discussions, officials said.

Later Xi hosted a banquet in the honour of Modi at East Lake.

Taking India-China relations on a forward-looking path, charting the future direction of the relationship! PM @narendramodi and Chinese President Xi take a walk together along the East Lake in Wuhan today morning. pic.twitter.com/KzBSbgR4dB

No business can stay untouched from the AI revolution: Telangana Minister KTR