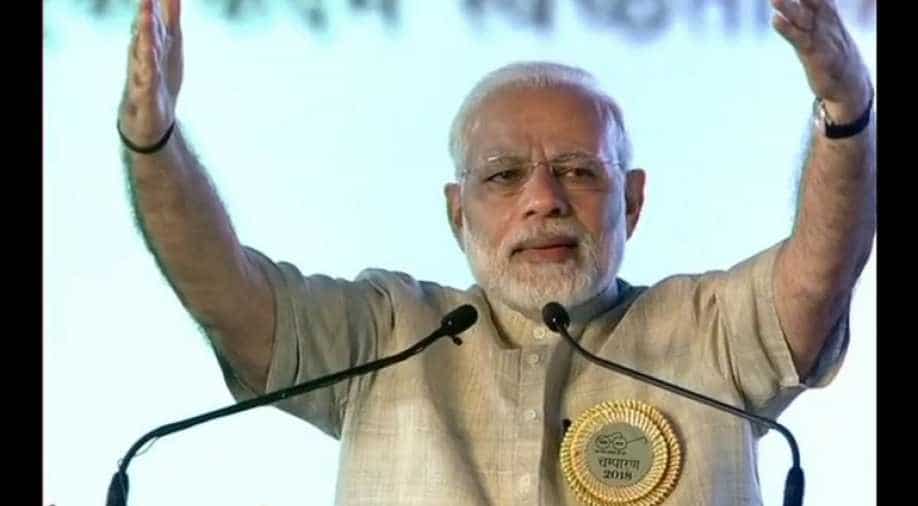 He also inaugurated the first phase of the Bastar Internet scheme under which a 40,000-km-long network of fibre optics cable would be spread across the seven districts of the tribal region.

Modi, who is the first prime minister to visit the tribal district of Bijapur, also inaugurated a new rail line and a passenger train between Gudum and Bhanupratapur, bringing north Bastar region on railways' map.

This was the prime minister's fourth visit to Chhattisgarh, where assembly elections are due later the year. He had visited Dantewada in May 2015, Naya Raipur and Rajnandgaon in February 2016 and Naya Raipur in November 2016.

He also laid foundation stones for road and bridge projects worth over Rs 1,700 crore.

The prime minister's visit to the state coincides with the birth anniversary of Dalit icon B R Ambedkar.

Under the Ayushman Bharat Scheme, the government aims to open 1.5 lakh health and wellness centre by 2022, which would be equipped to treat host of diseases, including blood pressure, diabetes, cancer and old-age illness.

Also under the scheme, the government has prepared the broad contour of the National Health Protection Scheme (NHPS) and work is on to finalise parameters for identifying beneficiaries and hospital entitlement.