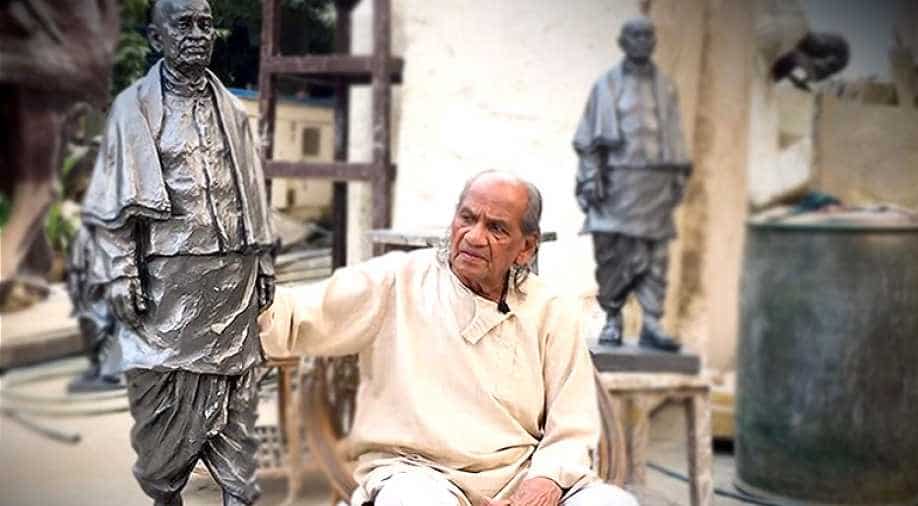 "This statue describes Sardar Patel as a strong-willed person," he says proudly.

The 600-feet 'Statue of Unity' overlooking the Sardar Sarovar Dam near Vadodara is today the "world's tallest statue" but it was made by a sculptor who is no more than just over 5 foot, 5 inches, aged 93, a man with tall dreams - Ram Vanji Sutar.

The gigantic structure, inaugurated by Prime Minister Narendra Modi as tribute to Sardar Patel on his 143rd birth anniversary, can be gauged by the fact that Patel's feet itself measures a mammoth 80 feet, according to Ram.

As a young man back in the summer of 1947, Ram had a dream, in his own words he says a bird chirped in his ears while he was asleep that he should leave everything and follow his dream, sure enough, he left everything and struck out. Ram has made over 350 Gandhi statues the world over and at over 90 is still going strong.

Ram calls the unique Vallabhbhai statue as his "masterpiece" and a dream come true. Ram painstakingly looked at every detail of the towering leader right from his walk, the clothes he wore, his expressions to his sitting posture. It was a project which started in 2013 and took three and half years to conceive, build and finally to be erected alongside the picturesque dam in Gujarat.

In his career, Ram has seen PMs and President's come and go, some vanish and other's make a mark, he has encapsulated them in his sculptures. His studio in the deepest corner of Noida in Uttar Pradesh showcases his vast array of work from Rajiv, Indira, Rajesh Pilot to a virtual who's who of Indian politics, it can easily be called India's version of Madame Taussads.

"This statue describes Sardar Patel as a strong-willed person," he says proudly. He is helped in his endeavour by his architect son Anil Sutar who combines his father's sculpting expertise with an architect's eye and cutting-edge engineering skills to put together statues which now has become a wonder of the world.

Anil informs quite candidly that the massive bronze structure has a "China touch" since it has been assembled there because India does not have a bronze foundry, of course, the father-son duo left nothing to chance spending weeks at a time in China to ensure it was conceived the way they envisioned it back home. It was brought to India in pieces, reassembled and was unveiled on October 31.

"There were statues of Gandhiji including of Nehru, Indira Gandhi, Maulana Azad and other personalities, then it was thought a statue of Sardar Patel was needed in Parliament," he says giving due credit to Patel's contribution in India's freedom struggle and his contribution towards uniting India's princely states.

The Padmashree awardee credits the "Statue of Unity" to PM Modi; "it takes two people - one who thinks about the concept and the other who partners the dream," he declares.

"As a young man, I had thought that I will one day make a life-size statue of Hanumanji in which on his chest Ram and Laxman will be carved, with this statute of Sardar Patel, I think I have achieved my dream," says the proud sculptor.

As the nation pays homage to Vallabhbhai, Ram Sutar too has carved his name in history, forever.