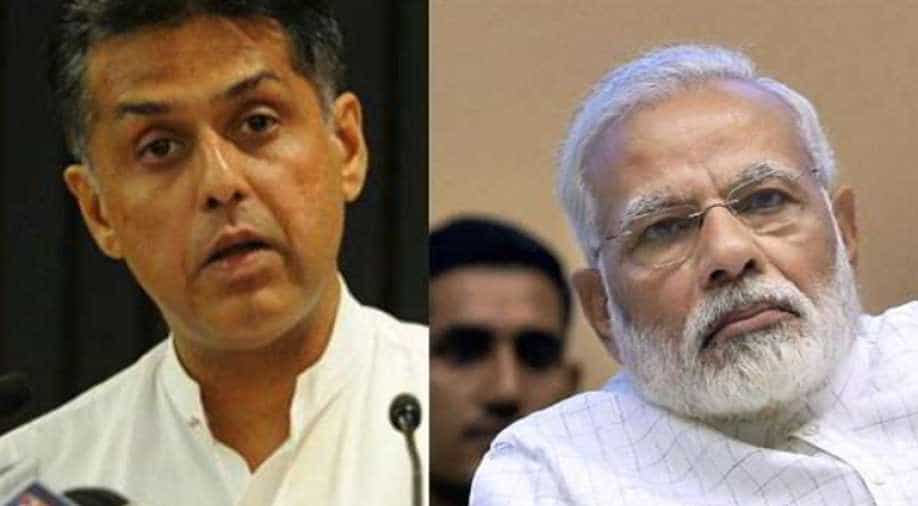 Following the backlash on Twitter, the Congress leader said he was willing to apologise

Using an abuse in Hindi that stated that PM Modi "befooled" people, the Congress leader added that even Mahatma Gandhi could not teach the prime minister patriotism.

He was responding to a tweet on the micro-blogging website that no-one could teach PM Modi patriotism, not even Mahatma Gandhi. The tweet was made in response to a short video clip put up by Manish Tewari about a gaffe committed by Modi abroad when he had started walking even as the national anthem was being played.

Following the backlash on Twitter, the Congress leader said he was willing to apologise.

3/3 or the Mahatma both of whom were invoked in response not my original tweet.In between flts saw the brouhaha on Twitter therefore context

4/4 if brouhaha is over Hindi phrase in colloquial -used to describe idiocity &nothing more. In this case of person who put PM over Mahatma

Willing to apologise for using a 'colloquial' Hindi phraseHowever will PM promise to unfollow those who heap unmentionable abuse on women???

Reacting sharply, Union minister Mukhtar Abbas Naqvi said a desperate Congress and its leaders had "lost their mental balance" after being rejected by the people. He said they were using foul language against the prime minister since they have run out of logic to counter him.

"A depressed Congress has become an expired bubble of abuses. When they do not have logic they take to such cheap language. The Congress has been rejected by the people and since then its leaders have lost their mental balance. They are in need of urgent psychiatric treatment," Mr Naqvi told PTI.

He said it is unfortunate that the Congress leaders had forgotten the dignity and decorum politics requires while targeting the BJP and the prime minister.

"It shows the mental state of the Congress and its leaders and the Congress leadership under Sonia Gandhi should apologise for this," he said, adding that by using such language, leaders like Tewari will destroy whatever little support base the Congress has been left with.

BJP leader Subramanian Swamy alleged that someone else is "orchestrating" Congress' abusive attack as Tewari has the reputation of being sober and sensitive.

"The only person I think who has the authority to make (such a remark) is Rahul Gandhi, who can say anything anytime.

"There is a genuine frustration in the Congress that despite all the policy failures that they are trying to point out the country is solidly with the BJP," he said.

The issue led to a major row on the social media with trolls targeting Tewari.

A hashtag "#CongLeaderAbusesPM" was also used and evoked sharp reactions from twitterati.

BJP spokesperson Nalin Kohli asked Congress president Sonia Gandhi and vice-president Rahul Gandhi to apologise for Tewari's actions which would otherwise be construed as having their "tacit approval."

Another BJP spokesperson Sambit Patra said since Manish Tewari is the spokesperson of the party Sonia and Rahul needed to explain why he did so.

He used the words of Congress leader Jairam Ramesh to hit out at the Congress, saying "the Sultanate has gone but the Sultans still behave as if they are still Sultans".

Manish Tewari is the second Congress leader after party general secretary Digvijaya Singh to come under fire for using foul language against Modi. The senior Congress leader had recently retweeted a post which contained expletives against the prime minister.

"Retweets are never endorsements. This is the basic principle of Twitter," he said after the controversy erupted.

"I have said it is not mine. I have disowned it. I have not used those words," he clarified.

The trolls, however, did not spare him.