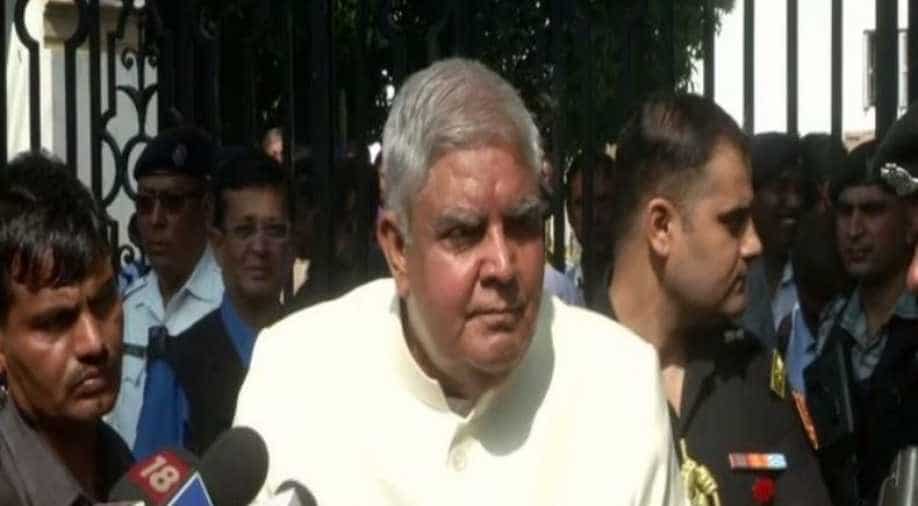 The governor also expressed his gratitude towards the section of society who have urged the protesters to shun violence.

Dhankhar termed her protest and rally as `unconstitutional` act.

".@MamataOfficial. I am extremely anguished that CM and Ministers are to spearhead rally against CAA, law of the land. This is unconstitutional. I call upon CM to desist from this unconstitutional and inflammatory act at this juncture and devote to retrieve the grim situation," tweeted Dhankar.

The governor also expressed his gratitude towards the section of society who have urged the protesters to shun violence.

"Gratitude to Intellectuals, filmmakers, actors and stage artists who urged protestors to shun violence. Hope others in such a category would similarly come forward. We are constitutionally obliged to follow law of the land and as Governor enjoined to ensure it and am at it," he said in another tweet.

Dhankhar had on Sunday prevailed upon the chief minister to withdraw advertisements stating that National Register of Citizens (NRC) and the Citizenship Amendment Act (CAA) will not be implemented in the state.

On Sunday, amid protests against the Citizenship (Amendment) Act, 2019 in several parts of West Bengal, internet services were suspended temporarily as a precautionary measure in some districts of West Bengal, sources said.

The Act seeks to grant Indian citizenship to refugees from Hindu, Christian, Sikh, Buddhist and Parsi communities fleeing religious persecution from Pakistan, Afghanistan, and Bangladesh and who entered India on or before December 31, 2014.