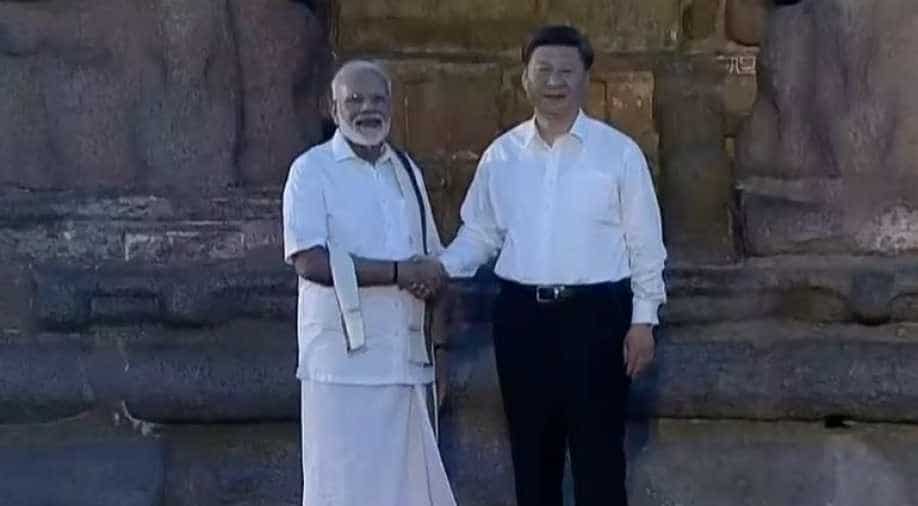 Basking in the rich heritage of India, Prime Minister Narendra Modi and Chinese President Xi Jinping enjoyed a thrilling cultural performance at the centuries-old Shore Temple with the Bay of Bengal in the backdrop.

Kick-starting the second informal summit, Prime Minister Modi took the visiting Chinese dignitary on a tour of UNESCO World Heritage Sites like Arjuna's Penance, Krishna's Butter Ball and the Shore Temple in Mahabalipuram, before settling down for the colourful performances.

The city is famed for its temples and architecture which date back to the Pallava Dynasty.

Xi was received in the coastal city by a veshti-wearing Modi earlier in the day. While the Chinese President opted for a relaxed outfit comprising of a crisp white full-sleeved shirt and black trousers, Modi looked like a true son of the soil in a veshti, angvastram and a white half-sleeved shirt for the first day of the informal summit.

The meeting is a follow up to the inaugural summit which was held in Wuhan from April 27 to 28 last year.

Taking forward the Wuhan Spirit, the Mahabalipuram meet will provide an opportunity to the Chinese President and PM Modi to continue their discussions on overarching issues of bilateral, regional and global importance and to exchange views on deepening India-China Closer Development Partnership, the External Affairs Ministry said in a statement.

President Xi was earlier accorded a grand welcome by people who lined the streets along with traditional drum players, creating a warm environment which personified the Indian belief of 'Atithi Devo Bhava'.