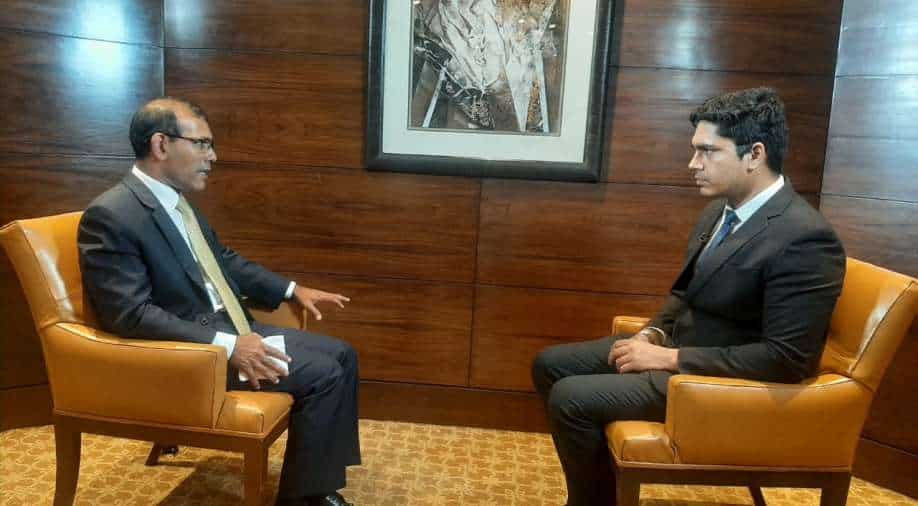 Maldives President Solih had recently issued a decree banning the anti-India protests, calling it a threat to national security.

Speaking to WION’s Principal Diplomatic Correspondent Sidhant Sibal, Nasheed, who is in Delhi for the Raisina Dialogue 2022, said, "People of Maldives will never back an ‘India out’ campaign...Indian families, doctors, teachers, accountants— all are contributing to our economic development."

Maldives President Solih had recently issued a decree banning the anti-India protests, calling it a threat to national security.

Police authorities had removed "India out' banners from the residence of Yameen, who is the leader of opposition Progressive Party of Maldives (PPM).

Slamming the Chinese investment policies that have resulted in huge debts, Nasheed, who is also the former president, said, "China has intentionally inflated the price of the project. Look at what is happening in Sri Lanka, it is so sad."

He added, "It was a mistake that we took part in road and belt initiative."

Nasheed also did not rule out standing for the presidential elections next year.

WION: How do you see India-Maldives relations?

Mohamed Nasheed: India and Maldives relations improved drastically since we came into the government. We have an India first policy, which is exactly the same manner as India's foreign policy in the neighbourhood. There is a credit line for projects which India is assisting us, and the government is submitting very good projects and they are all going very nicely—the cultural exchanges, the capacity building work, the students' exchanges and the university exchanges—everything is happening and we have a very bright future, both of our countries.

WION: There have been certain segments indulging in anti-India campaigns and you have taken a strong position on that. Will it help to curtail these campaigns? And who do you think is responsible for these campaigns.

Mohamed Nasheed: You know, people of Maldives will never back an ‘India out’ campaign, I am aware of that. I am a politician and by saying this I will get more vote. Because we eat the same food, we watch the same films, we read the same books, we look the same, and why would any sane Maldivian ask an Indian to leave. There are Indian families, doctors, teachers, and accountants, who are contributing to our economic development. For instance, the State Bank of India has single-handedly invested in our tourism industry for the last 50 years. Look at the results, it has become a billion-dollar industry now. The businessmen appreciate this, the people appreciate this. I really do not think it is a popular movement at all.

WION: Your govt has taken actions against this campaign, more actions expected? Also, if you can talk about the bill against such campaigns.

Quran is very clear, that you should love your neighbour. So, legislation must also come and explain that you should love your neighbour. If you have a problem with a neighbour, you can come here, this country is a democratic country, it has its intuitions. Even if Yameen has an issue, he should have approached the court here. It’s just a fabricated issue and he is fuelling it.

WION: So, is the anti-India campaign an election ploy or a foreign hand?

Mohamed Nasheed: It can't be an election ploy because people don't want it. I am sure the authorities are aware of the funding for all the trips they make, for the campaigns and shirts.

WION: Are you pointing out at China?

Mohamed Nasheed:  Well, before I say that, police must open up an investigation.

Mohamed Nasheed: Well, you can't equate development to concrete. Ex-president Yameen thought development is concrete and invited Chinese, and as a result this huge debt was created. Now, if you look at it, debt has no relations to the assets created. The asset value is not a third of the debt. China has intentionally inflated the price of the project, so the business plan will fail.

You will never get a yield to pay back the debt from these assets and then you will default and they ask for equity. With equity you lose land, and with land you lose sovereignty. It is a very grave issue.

Look at what is happening in Sri Lanka, it is so sad. Whatever India gave to us, it was very transparent, it went through proper tendering process, and therefore we get the proper price. You have to have the proper price.

Therefore, the rent will have to be 14000-15000 but people can't afford that. So that the govt can't afford the rent. Now the government is subsiding the rest. The flats will not give the money to pay back the loan. The actual cost must be found and that is the money we have to pay. These small grant projects, the high impact projects, the projects that have a better impact on our livelihood, they are far more important.

I will give an example. Recently, Indian minister Jaishankar came to Male and inaugurated two projects. One was $50 to $60 million dollar policy academy and another was a $500,000 million drug hospital, and detoxication centre. The whole community was there with Jaishankar.

India is giving a lot of small grants and I don't think we are looking for big concrete. We need nature-based adaptions, and hybrid adaption, and these things can be done through smaller interventions than huge big loans.

WION: So, you are essentially saying India was right by staying away from the Chinese connectivity projects and the debt crisis it has created as you gave the example of Sri Lanka

WION: Your country is at the heart of the Indian Ocean. How do you assess the security situation in the region and the practical cooperation like the Colombo Security Conclave that can be taken forward?

Mohamed Nasheed: Well, in 2011, we started all the National Security Advisors meetings every year. We also have a lot of exercise training, and joint exercises with our coast guards and the Indian navy and Mauritius, Seychelles and Sri Lanka. I think these programmes are ongoing and hopefully, they will find a structure in itself which would assist India in our safety and security.

WION: Your country is gearing up for the presidential elections. Will you stand for elections? And there seems to be infighting within your party.

Mohamed Nasheed: Well, our party does these internal elections, and they have a primary to decide that. If you, for instance, you look at the United States, they shout at each other in their own party. That is how they get a person. Then this person goes to the nation. It’s upon our members to decide who they want to bring out as their presidential candidate. I think I have always said that I will take part in the primary, but I am hopeful I will win.

WION: So, you do not rule out that you will stand for elections next year.

Mohamed Nasheed:  I don’t want to rule out. If people, our party members decide that I will be contesting, I will do that. I will do everything that will benefit our party and our country.

WION: Do you have any plans to change the political structure of the country from a presidential to a parliamentary form of the system?

WION: There was an attack on you, who was responsible for it?

Mohamed Nasheed: We still have not found. Authorities have found four people who had their hands on it. But who funded it, who schemed it, from where did they get the technology for bomb—there are thousands of question that still need to be answered, and I hope and believe the government will do it.

WION: But any indication who did it? Why will someone target you?

Mohamed Nasheed: I don't know. The police must tell me, the courts must decide.

WION: You also pointed out to rise of extremism, what has been the worrisome factor?

Mohamed Nasheed: Well, our youth are getting alienated. Dropout rates are increasing, employment among youth is increasing, drug is increasing and all these together push you to these unnecessary actions. We must take care and try to build a better society that is able to assist our people. I think, de-radicalisation programmes and also employment and training for the young is very important.

WION: We have two regional groupings, SAARC and BIMSTEC. Do you see Maldives becoming part of the BIMSTEC grouping?

WION: Would you like to be part of the BIMSTEC?

WION: What is your opinion on the Russian invasion of Ukraine and how has it impacted your country in terms of inflation?

Mohamed Nasheed: Well, actually I really don't want to talk about other countries’ business, but every country must respect sovereignty. War should never be a solution. I hope Russia will be able to the ceasefire, start talking and solve these issues amicably. This has an impact on all of us, tourist arrival, food price, energy price, everything is going up. It will be far worse if the war spreads to other European countries. There are warmongering countries, and when they do fight, my God, they do fight. We have seen two world wars during the last century. And we don't want to see another one. Why do u want to kill so many people that is in no one's interest? I hope they will stop.