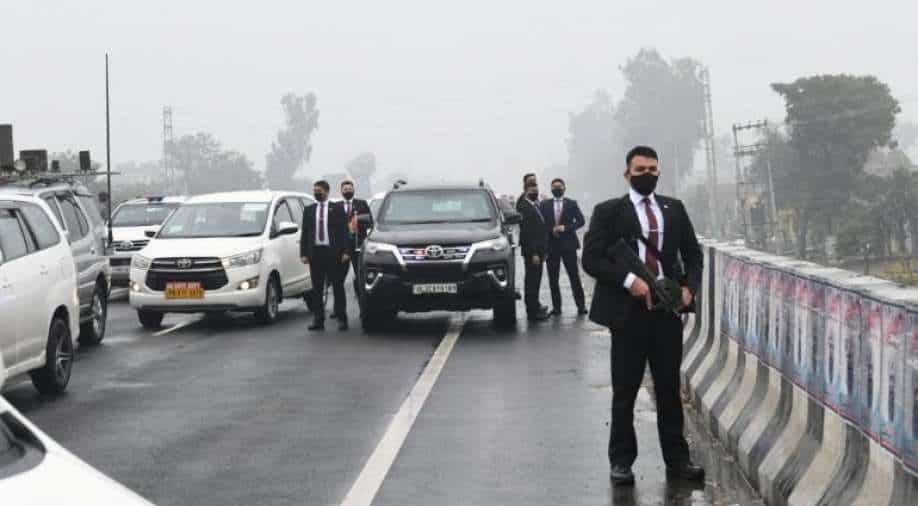 'The PM was stuck on a flyover for 15-20 minutes in Bathinda. This was a major lapse in the security of PM,' says MHA. Photograph:( Others )

"Around 30 kms away from National Martyrs Memorial in Hussainiwala, when the PM’s convoy reached a flyover, it was found that the road was blocked by some protestors. The PM was stuck on a flyover for 15-20 minutes. This was a major lapse in the security of PM," the MHA said.

The Ministry of Home Affairs sent a harsh letter on January 5, alleging a "serious lapse in PM Narendra Modi's security" while he was in Punjab for various activities.

According to the report, the Punjab government neglected to deploy additional security to ensure the safety of any road traffic.

On Wednesday, PM Modi's cavalcade became stalled on a flyover as protesting farmers blocked the road.

SPG troops swooped in and surrounded PM Modi's car while it remained stalled on the flyover, preventing any untoward incidents.

PM Modi's convoy was delayed on a flyover for 15-20 minutes when the lapse occurred.

Some protestors obstructed the caravan roughly 30 kilometres from the National Martyrs' Memorial in Hussainiwala.

According to the Union Home Ministry, PM Modi arrived in Bathinda this morning and was scheduled to fly to Hussainiwala to visit the National Martyrs' Memorial.

Due to rain and poor visibility, the PM was forced to wait for around 20 minutes.

When the weather did not improve, he decided to drive to the National Martyrs' Memorial, which would take more than two hours.

He proceeded to travel by road after necessary confirmation of necessary security arrangements by Punjab Police DGP Siddharth Chattopadhyaya.

When the Prime Minister's convoy approached a flyover about 30 kilometres from the National Martyrs' Memorial in Hussainiwala, it was discovered that the road had been blocked by several protestors.

For 15-20 minutes, the Prime Minister got trapped on an overpass.

The MHA stated that the Prime Minister's itinerary and travel plans were informed to the Punjab government well in advance, and that the latter should have made the appropriate logistical and security arrangements in accordance with procedure.

In addition, the Punjab government could have deployed greater security to secure any road movement, as per a contingency plan that should have been in place.

This, according to the MHA, was not done.

Following the security breakdown, the convoy was rerouted back to Bathinda airport, according to the MHA, who also stated that the state government has been requested to provide a full report.

The MHA has ordered the state government to identify and punish those responsible for the significant security breach.