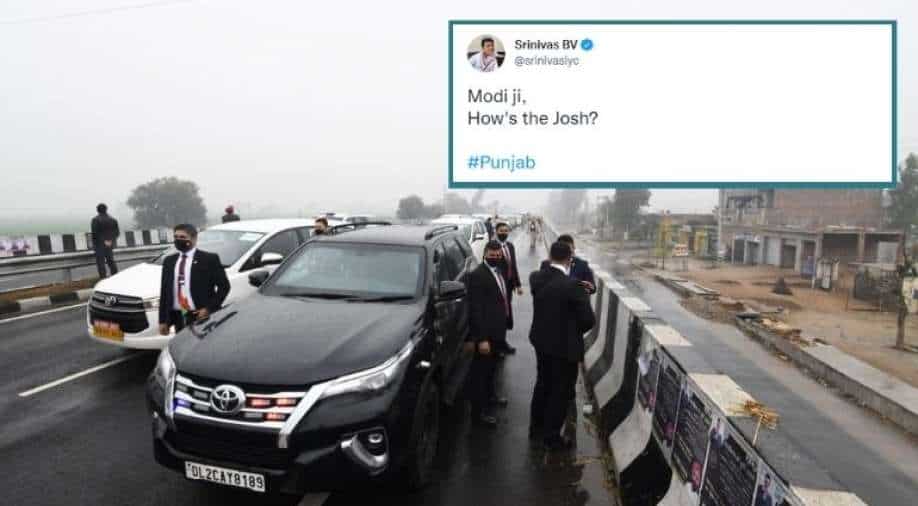 The Ministry of Home Affairs taking cognisance of this serious security lapse has sought a detailed report from the state government. Photograph:( WION )

The home ministry has sought a detailed report from the Punjab government, which, on the other hand, says the Prime Minister returned for a different reason.

"When PM Modi had his security breached, Congress leaders erupted with joy, asking him how his Josh was.PM Modi, magnanimous as ever, on his way back, communicated, 'Zinda laut raha hoon!'" Smriti Irani, Union Minister, stated.

She also said that "We know the Congress hates PM Modi, but today, they tried to harm the Prime Minister of India.Such is the breakdown of law & order in Punjab that the DGP of police claims he's incapable of providing security support to the PMO and security details.,".

The home ministry has sought a detailed report from the Punjab government, which, on the other hand, says the Prime Minister returned for a different reason.

Voicing concerns about Punjab's current security condition, Smriti Irani said that "Who in the Punjab Govt gave information about the PM's route to individuals who planted themselves atop the flyover?" Video evidence, now publicly available, brings such questions to the fore. "

The prime minister was expected to fly to Ferozepur today after arriving in Bathinda earlier in the day.

According to the MHA, he chose to travel by road because of the bad weather.

A group of protesters obstructed Modi's convoy around 30 kilometres from the National Martyrs' Memorial in Hussainiwala, Ferozepur. The prime minister was "stuck on a flyover for 15-20 minutes".