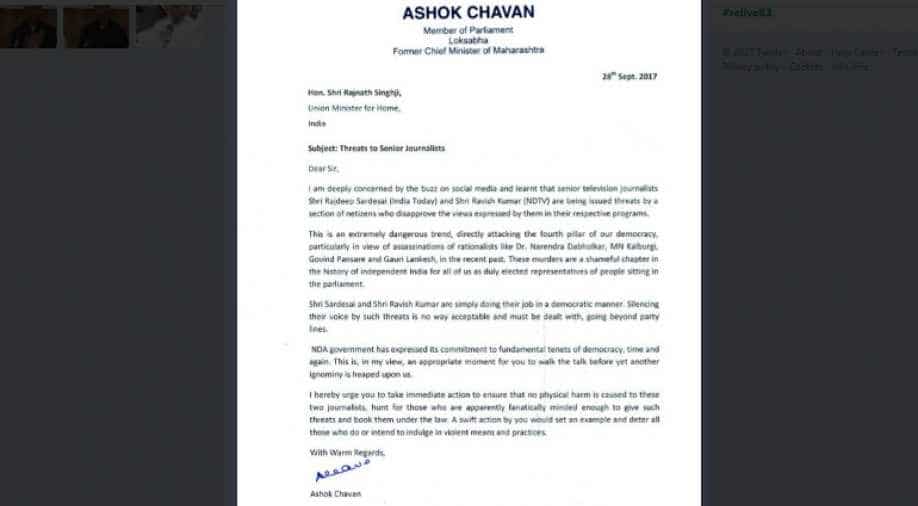 Former chief minister of Maharastra Ashok Chavan sent a letter to union home minister Rajnath Singh writing that he is deeply concerned by the buzz on social media and also wrote that senior television journalists are being issued threats. The threats are issued to senior journalists Rajdeep Sardesai(India Today) and Ravish Kumar (NDTV) by the section of netizens who disapprove the views expressed by them in their respective programs, Ashok Chavan wrote.

The former chief minister expressed his deep concern and said the fourth pillar of the democracy is in threat. He condemned the assassination of rationalists like Dr Narendra Dabholkar, M N Kalburgi, Govind Pansare and the recent case of the murder of Gauri Lankesh by saying these incidents shameful chapters in the history of independent India.

In the letter, Ashok Chavan asked the NDA government to fulfil its commitment to fundamentals tenets of democracy and urged to take an immediate action to ensure no physical harm is caused to the journalists (Rajdeep Sardesai and Ravish Kumar).

The police in Delhi and Noida are investigating four complaints filed by journalists who have complained about receiving death threats on WhatsApp.

In a recent unnamed letter sent to a journalist said that whoever goes and dares to go against  RSS and Bharatiya Janata Party (BJP) 'will not be spared' reminding the recent incident of killing of rationalist Gauri Lankesh stating her anti-nationalist.

Several journalists have revealed of receiving threat messages from unknown people but have not followed up with the police.

In a similar case happened on September 16, a female journalist of The Quint received rape and death from anonymous after she described the lyrics of a rap song Bol Na Aunty Aau Kya as sexist and abusive.