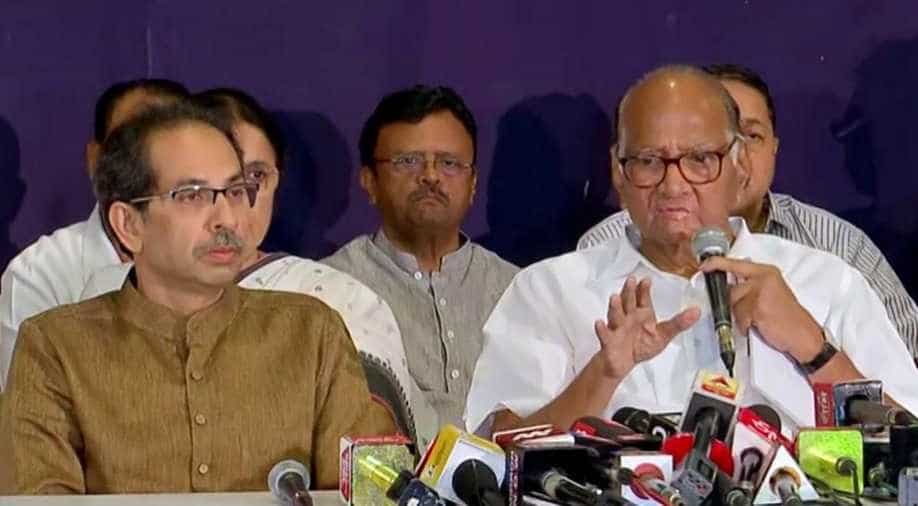 Accusing BJP of manipulating EVMs during polls, Uddhav Thackeray everyone knows what Chhatrapati Shivaji Maharaj did when betrayed and attacked from the back.

Thackeray and Nationalist Congress Party Chief Sharad Pawar were addressing a joint press conference in Mumbai after BJP pulled off a coup of sorts by forming the government in Maharashtra with the support of NCP's Ajit Pawar.

Accusing BJP of manipulating EVMs during polls, Uddhav Thackeray said everyone knows what Chhatrapati Shivaji Maharaj did when betrayed and attacked from the back.

Meanwhile, Sharad Pawar said no NCP leader or worker is in favour of an NCP-BJP government and added that Ajit Pawar's decision was against the party line.

''Congress, Shiv Sena and NCP leaders came together to form the government. We had the numbers. We had our official numbers- 44, 56 and 54 MLAs with us who had supported the government. Several independent were also with us and we had numbers around 170,'' Pawar added.

Reminding his party MLAs of anti-defection law, Pawar said there was a possibility of MLAs losing their assembly membership.

Three MLAs who were present during the oath-taking ceremony said were unknowingly taken to the oath ceremony pledged their support to NCP.