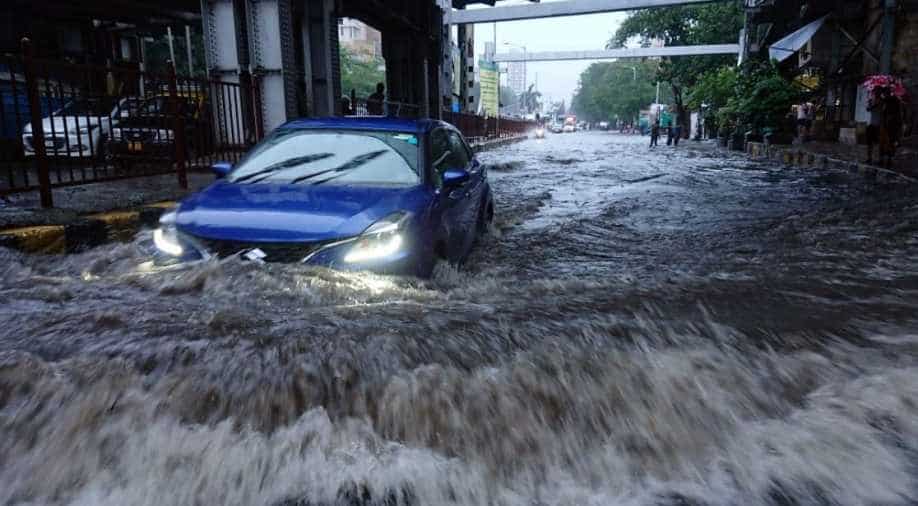 File photo: A car moves on the waterlogged road after heavy rain at Matunga in Mumbai. Photograph:(ANI)
Follow Us

While 18 people died in the collapse in Malad, three succumbed to injuries in Kalyan. In another wall collapse in Pune, six people lost their lives.

At least 27 people died in wall collapse in Malad and Kalyan in the Mumbai city and Pune as incessant rains pounded Mumbai metropolis and other parts of Maharashtra on Tuesday.

While 18 people died in the collapse in Malad, three succumbed to injuries in Kalyan. In another wall collapse in Pune, six people lost their lives. 17 other people sustained injuries.

The Maharashtra government has declared the day as a public holiday.

"Pained to know about the loss of lives in Malad Wall Collapse incidence. My thoughts are with families who lost loved ones & prayers for speedy recovery of injured. Rs 5 lakh will be given to the kin of deceased," he tweeted early morning.

The torrential downpour has halted the movement of air, rail and road traffic. Around 54 flights were diverted to nearby airports and 52 flights were cancelled as heavy rains continued to lash Mumbai and its neighbouring areas, an airport official said on Tuesday.

The heavy downpour caused water logging at various places in Mumbai and the surrounding metropolitan area. BMC has received 45 complaints of waterlogging.

BMC is giving regular updates about waterlogged places where water has been pumped out Indian Navy teams have been deployed in Mumbai to help rain hit Mumbaikars.

India Meteorological Department has predicted heavy in Mumbai and suburban parts in next 48 hours.

"Heavy to very heavy rainfall expected in Mumbai and suburban parts in next 48 hours, a similar situation expected for Vidarbha and Marathwada. Advice tourists to not visit mountain areas since heavy rainfall is expected in parts of Maharashtra," Met Department said.

Rains and waterlogging have brought the state to its knees as the movement of traffic slowed down on all the major roads in the city. Cars and vehicles were stuck on waterlogged roads at various places.

Mumbai Police is constantly updating residents about waterlogging roads and asking them to take alternative routes. Traffic on various roads has been diverted.

Amidst the heavy rain, Thane Municipal Transport had arranged extra buses to ferry passengers up to Mulund check post. The arrangement has been directed by Thane Municipal commissioner after local services were stopped between Kurla and Thane.

The Chief Minister said that the government is prepared to deal with the situation.

"High tide is expected at 12 noon, we will monitor the situation. Last night Mumbai police received 1600-1700 tweets from people, they received immediate help. BMC Disaster Management worked entire night. Heavy rainfall is expected in next two days. We are prepared for it," Fadnavis said.

According to SkymetWeather, Mumbai has recorded 795 mm of rainfall for the past four days and rains of varied intensity are expected to continue until July 5.