Maharashtra comes to standstill after protests over Bhima-Koregaon violence 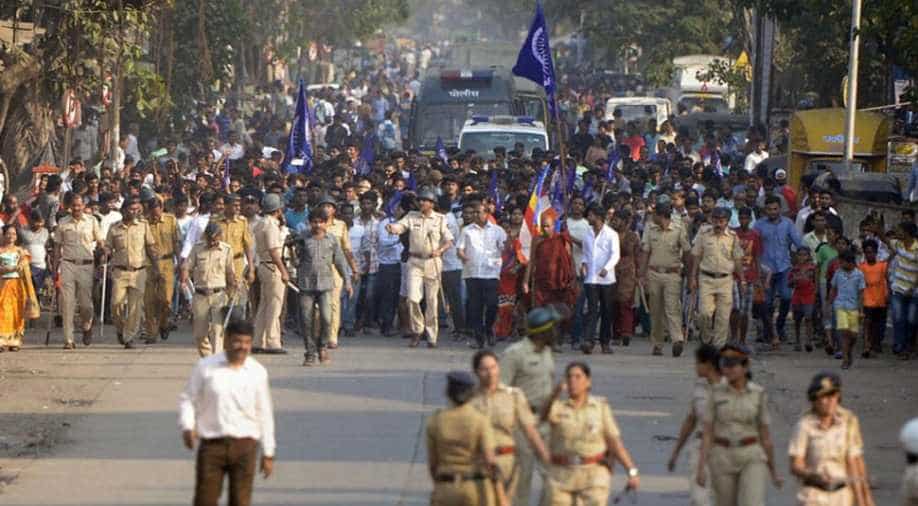 A battle fought on January 1, 1818, between the British East India Company, containing Dalits in its infantry, and the Peshwas, who were upper-caste Brahmins, at Bhima Koregaon, has come to haunt the citizens residing in the 21st century.

On the 200th anniversary of the battle, clashes broke out between the Dalits and alleged right-wing groups on January 1, across towns and cities in Maharashtra.

The Dalit protesters blocked major roads in Mumbai, disrupted road traffic and train services, bringing the life to a standstill after over 160 buses were damaged and heavy security was deployed to control the situation.

BR Ambedkar's grandson Prakash Ambedkar called for Maharashtra bandh on Wednesday, after the clashes killed one person and injured several others.

Groups of Dalit activists jumped on the railway tracks, raising slogans and waving flags to attempt a rail-blockade at Thane and Virar stations in Palghar.

However, they were prevented by the security forces and nearly 100 protesters were detained.

Commuters have been left stranded due to lack of mode of transport in the state today. Scores of people were witnessed waiting near Thane's Vartak Nagar.

Metro services between Asalfa and Ghatkopar Metro station in Mumbai were stopped by the protesters.

Violence spilled over to adjoining parts of Maharashtra after the right-wing groups were objecting to the observance of 'Victory Day' since they considered it to be an anti-national celebration.

Even the Dabbawala association decided not to run its delivery service, fearing the law and order issues in the city.

The bus service towards Pune's Baramati and Satara and inter-state bus services from Karnataka-Maharashtra have been temporarily suspended till further order as a precautionary measure.

To prevent further damage the administration has also suspended internet services in Aurangabad.

Schools and colleges in Thane remain closed considering the safety and security of students.

Earlier, Deputy Commissioner of Police (DCP) Pravin Mundhe appealed to the citizens to carry on with their daily routine.

"There will be peace in the city. Don't trust rumours being spread on social media," he added.

Meanwhile, the Rajya Sabha was adjourned today till noon after opposition including Congress and BSP, sought to raise the issue of caste violence in the state.