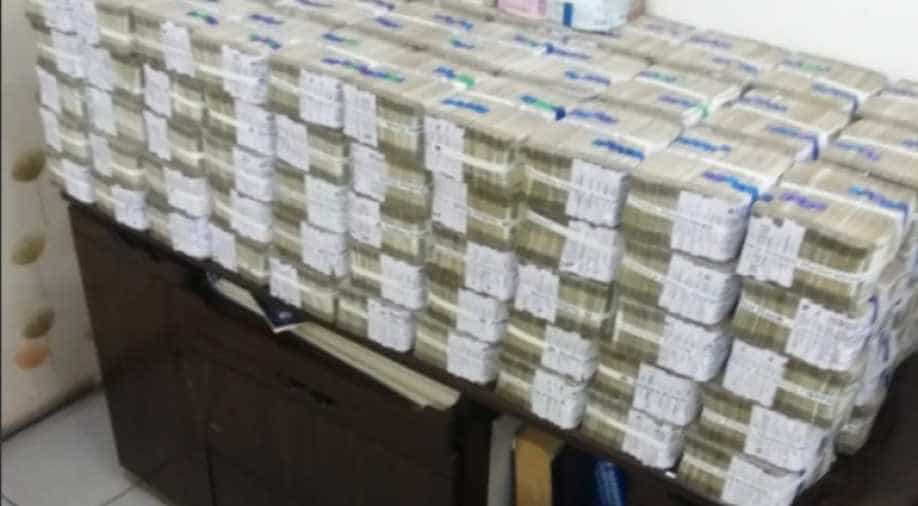 The I-T department said that it had also detected several unaccounted/benami properties at posh locations in Delhi. Photograph:( ANI )

Several unaccounted and benami properties at posh locations in the national capital have also been detected.

The Central Board of Direct Taxes (CBDT) on Monday hinted at the transfer of "cash to the headquarter of a major political party" in the national capital while stating that Income Tax (I-T) Department has detected a well-organised racket of a collection of unaccounted cash of about Rs 281 crore.

"Searches in Madhya Pradesh by Delhi Directorate of Income Tax have detected widespread and well-organised racket of the collection of unaccounted cash of about Rs 281 crore through various persons in different walks of life including business, politics and public service," said the CBDT, which frames policies for the I-T Department.

Searches in Delhi (group of a close relative of the senior functionary) have further led to seizure incl. cash book recording unaccounted transactions of ₹ 230cr, siphoning off money through bogus billing of more than ₹ 242 cr & evidence of more than 80 companies in Tax havens.

According to CBDT, "meticulous records of collection and disbursement of cash in the form of handwritten diaries, computer files and excel sheets found and seized corroborate the above findings. Unaccounted cash of Rs 14.6 crore has been found so far, besides 252 bottles of liquor, few arms, and hide-skins of the tiger.

"The searches in Delhi in the group of a close relative of the senior functionary have further led to the seizure of incriminating evidence including cash book recording unaccounted transactions of Rs 230 crore, syphoning off money through bogus billing of more than Rs 242 crore and evidence of more than 80 companies in tax havens," said the CBDT.

Several unaccounted and benami properties at posh locations in the national capital have also been detected. Instances of violations of the Model Code of Conduct are being brought to the notice of the Election Commission of India (ECI), said the Central agency.

Madhya Pradesh Chief Minister Kamal Nath`s officer on special duty (OSD) Praveen Kakkar`s son Salil Kakkar was picked up on Monday by the I-T sleuths for interrogation, while I-T raids continued at various locations across the country including the residence of Ashwin Sharma, an associate of Praveen Kakkar, who had got most of his companies registered in the name of his son Salil.