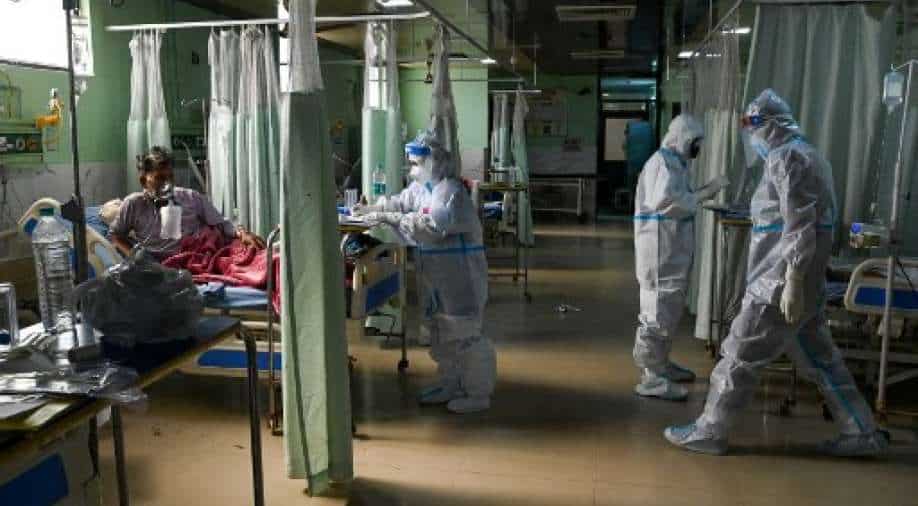 Health workers attend to a coronavirus patient inside the ICU in India Photograph:( AFP )

In April last year, the United States was reporting more than 32,000 cases, then the curve flattened but in July new infections climbed up again.

India's numbers are going from bad to worse with over 412,000 new COVID-19 cases now, which is the highest number of new infections India has reported in a single day.

There have been close to 4,000 deaths - another grim record. The total fatalities in India have now crossed the 230,000 mark. There are 3.5 million active cases which is the second-highest in the world.

As many as 12 states have more than 100,000 positive patients. However, the recoveries remain steady with more than 329,000 patients recovered in the last 24 hours.

In all, more than 17 million people have recovered since last year. Experts say the peak might be weeks away, India is now bracing for a third wave.

Around the world, the pandemic is playing out in cycles. There is a first wave, then a lull. Then comes a second wave and a sudden explosion of cases.

The West has been through it. In April last year, the United States was reporting more than 32,000 cases, then the curve flattened but in July new infections climbed up again.

At its peak, the US was reporting more than 70,000 cases in July 2020 which is almost double the number of cases compared to the first wave. After this, America's numbers kept going up during the third wave.

By January this year, the US was reporting almost 300,000 cases a day as new infections increased nine times, the same was with fatalities.

During the first wave in April 2020, the US reported more than 2,000 deaths and by January 2021, that's around the peak of the third wave, America was reporting around 4,000 deaths in a day.

The deaths doubled by the third wave. The pandemic is on the retreat in America, thanks to an aggressive vaccination campaign and by the end of last month, new cases in the US had declined by as much as 26 per cent.

Now people can take off their masks in less crowded places.

In April last year, Europe was reporting around 35,000 new cases a day.

It was the first wave and by November 2020, Europe was gripped by the second wave as new infections zoomed past 300,000. It was the highest number of daily infections that Europe reported during the pandemic.

New cases in the European Union countries have dropped by almost 30 per cent. Both America and Europe control targeted lockdowns and aggressive vaccination.

India too needs a mix of both. As of today, at least 21 states and Union Territories have imposed restrictions that cover 81 per cent of the country's population.

So India's numbers are not the worst in the world but what's making India's surge scary are the shortages and they are far from over.

Now with the threat of a third wave looming, India needs to ramp up its infrastructure quickly, not just for adults but also for children.

Citizens below 18 years of age make up 30 per cent of India's population. India must start thinking about vaccinating them.