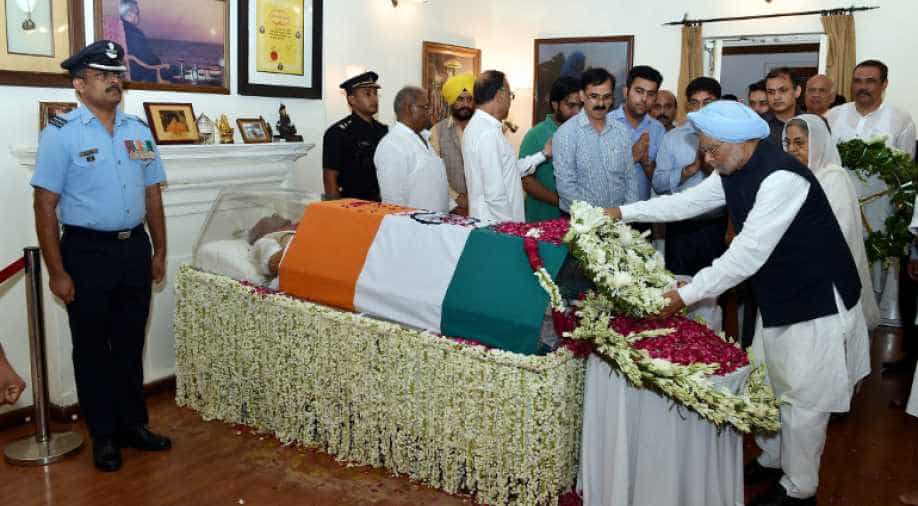 A pall of gloom descended on the Krishna Menon Marg where politicians and members of the public gathered to pay their final tribute to former prime minister Atal Bihari Vajpayee at his residence.

Shouting slogans like 'Atalji amar rahe' (long live Atalji) and 'Vande Mataram', scores of people outside Vajpayee's residence sombrely stood outside with flowers in their hands to catch a glimpse of their leader.

The road turned into a high-security zone with politicians across the party lines coming to pay tribute to him.

Vajpayee died due to multiple organ failure at AIIMS. He was 93.

Prime Minister Narendra Modi visited his residence and stayed for over an hour.

Calling it the "end of an era", PM Modi said the "exemplary leadership" of Atal Bihari Vajpayee had "set the foundations for a strong, prosperous and inclusive India in the 21st century". The "futuristic policies" of the three-time Prime Minister had "touched the lives of each and every citizen of India".

India grieves the demise of our beloved Atal Ji.

His passing away marks the end of an era. He lived for the nation and served it assiduously for decades. My thoughts are with his family, BJP Karyakartas and millions of admirers in this hour of sadness. Om Shanti.

It was Atal Ji's exemplary leadership that set the foundations for a strong, prosperous and inclusive India in the 21st century. His futuristic policies across various sectors touched the lives of each and every citizen of India.

Atal Bihari Vajpayee's final journey will begin at 1 pm today with cremation at 4 pm. His body will be taken from his residence at 6, Krishna Menon Marg to BJP HQ on Deendayal Upadhyay Marg, near New Delhi Railway Station, at 9 am.

His tearful nephew Anoop Mishra said Vajpayee has left a void that is impossible to fill.

"It is a very big loss for us and his death has left a void that would be impossible to fill," said Mishra.

People from all walks of life and ages stood outside his residence.

"He was a renowned statesman who contributed to bringing a change in Indo-Pak relations and remained a key supporter of SAARC and regional cooperation for development. Pakistan government and people extend their heartfelt condolences to his family and to the Government and people of India," said the statement issued by Islamabad.

Meanwhile, Bangladesh PM Sheikh Hasina said Vajpayee would be recalled in Dhaka as one who supported the war of Bangladesh's liberation. "As a token of recognition for his invaluable contribution to our Liberation War in 1971, Bangladesh government conferred on him Bangladesh Liberation War Honour. Today is a day of great sadness for all of us in Bangladesh," she said.

A seven-day state mourning has been announced by the central government as a mark of respect to former prime minister Atal Bihari Vajpayee who died after prolonged illness at AIIMS in the national capital. During this period, the national flag will be flown at half-mast throughout India.