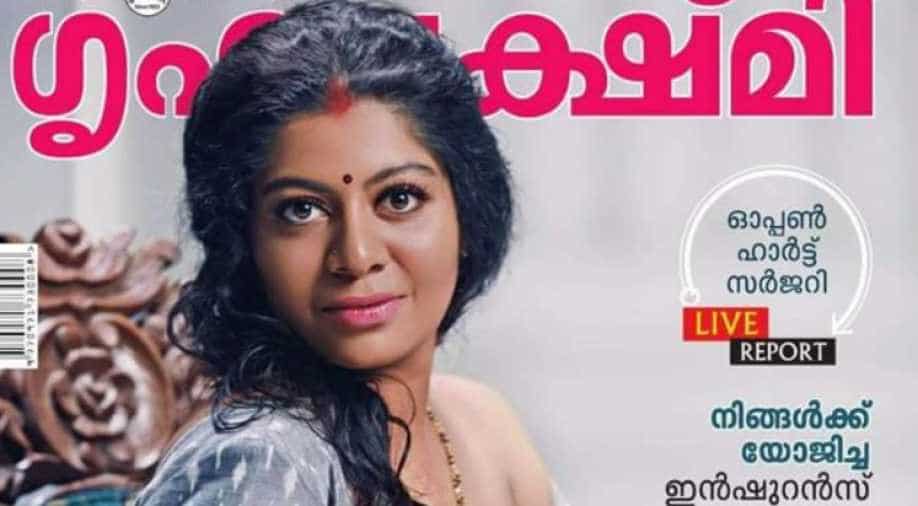 Malayalam magazine Grihalakshmi's cover on March 1 issue stirred up a conversation about breastfeeding in public. Photograph:( Others )

Model, poet, writer Gilu Joseph is making headlines for posing on the cover of a fortnightly Malayalam magazine, Grihalakshmi. The 27-year-old artist who hails from Kerala's Kumily town of Idukki district is seen on the cover breastfeeding her child.

In an interview with IE Malayalam, Joseph notes that she was not reluctant in picking up the project and featuring on the cover of the magazine. Joseph identifies motherhood as a beautiful feeling that lets a woman celebrate and enjoy a wonderful bond with her offspring. Breastfeeding is often identified as an act of nurturing which comforts the child and strengthens the bond between a mother and her child.

Gilu proudly exclaims her right over her body and that showcasing the beautiful, nurturing act of breastfeeding -- which is otherwise often sexualised -- gives her immense joy and satisfaction.

In a first, the magazine doles out a strong messaging that reads, "Do not stare at us while we breastfeed".

In many ways, the magazine's edition and Gilu's appearance is beyond historical. Not only does it shake the patriarchal bedrock that refuses to budge over the centuries, it also aims to make women embrace and be proud of their bodies and shatter taboos. Joseph, a practising Christian, appears as a Hindu mother on the cover, another attempt at blurring the societal divides.

Translation - "Do not stare at us while we are breastfeeding"

I love the way Gilu Joseph (Model) stares at the reader straight in to your eyes. The message is a bang on! pic.twitter.com/SFYvNgDQrS

Meanwhile, as India takes baby steps at realising women's right to breastfeed fearlessly, without facing any stigma, Australia also had its first similar incident last year -- only that the woman here breastfed her child in a parliament full of MPs and not just on a magazine cover.

Last year, an Australian MP shook the world when she addressed the Parliament while breastfeeding her baby. The incident marked the first for the island country as well where Larissa Waters, a Greens MP, addressed the chamber while feeding 14-week-old  baby girl.

While Twitter gave mixed reactions to Gilu Joseph's bold avataar, most lauded her attempt of trying to normalise a "natural phenomenon" in a society that often sexualises the act.

Hats off #GiluJoseph and all others behind this campaign. https://t.co/RBJPNbh7MA