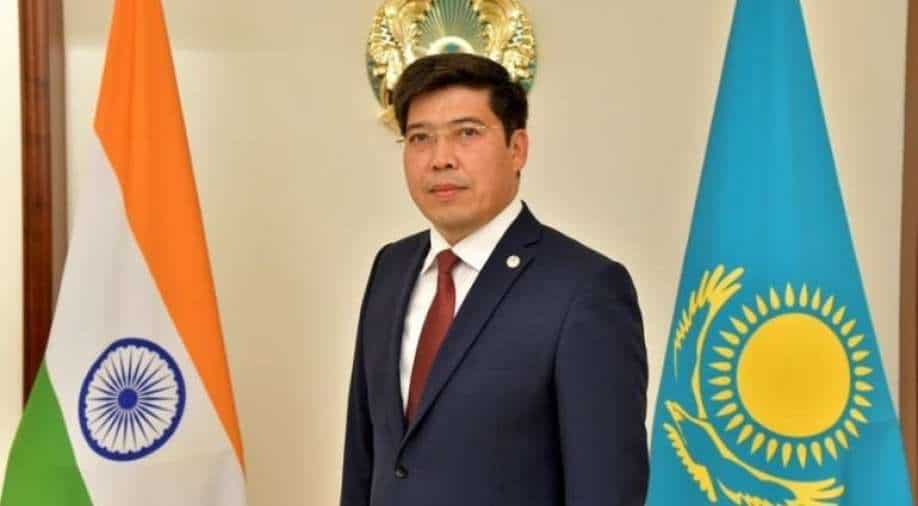 Speaking exclusively to WION, Kazakh envoy Yerlan Alimbayev said, 'Kazakhstan is interested in expanding ties with India, given its growing role in world economy and politics'

Kazakhstan's President Kassym-Jomart Tokayev is expected to visit India in early 2021, which will be his first to the country since taking charge in 2019. Speaking exclusively to our diplomatic correspondent Sidhant Sibal, Kazakh envoy Yerlan Alimbayev said, "Kazakhstan is interested in expanding ties with India, given its growing role in world economy and politics.". He also spoke at length on the significance of First December in his country which is celebrated as "Day of the First President" to pay honour to the Nursultan Nazarbayev, who ruled the country for nearly 3 decades. Envoy Alimbayev said, "First President proclaimed the equality of rights of all the people of Kazakhstan, regardless of ethnic and religious affiliations, as one of the fundamental principles of state policy."

Sidhant Sibal: How do you see India Kazakh relations. Both are members of the SCO. Infact, Kazakhstan takes over as the new Chairman of SCO head of govt from India. What can we expect..

Yerlan Alimbayev: Since Nursultan Nazarbayev is the founder of independent Kazakhstan, it is difficult to overestimate his contribution to the establishment and development of bilateral relations between Kazakhstan and India. Relations between Kazakhstan and India have exhibited considerable dynamism and momentum. India was one of the first countries to recognize Kazakhstan as a free, sovereign state. It is particularly noteworthy to mention that India was the very first country Nursultan Nazarbayev visited in February 1992 as the President of independent Kazakhstan. Diplomatic relations were officially established during this historic visit. This decision demonstrated the deep respect and admiration in which President Nazarbayev and the people of Kazakhstan hold India as a country endowed with a glorious past, having a vibrant present and blessed with a bright future. In 2009, by signing the Declaration on Strategic Partnership cooperation between our countries was brought to a higher level. At present we are working on the first State visit of President Kassym-Jomart Tokayev as soon as the situation with the pandemic stabilizes in early 2021. Kazakhstan remains a major trading partner of India in Central Asia and the second largest in CIS region. Our bilateral trade turnover has reached 2,2 billion USD over the 9 months of 2020. During the years of independence, Nursultan Nazarbayev was personally involved in the country's most significant investment projects, which to this day are successfully working in Kazakhstan. In particular, several Indian citizens and companies have a significant presence in Kazakhstan. Arcelor-Mittal Temirtau is a major investment project by an Indian non-resident. Several other well-known companies like Infosys, Punj Lloyd Kazakhstan Limited, KEC International Limited, TCS, ONGC Videsh Ltd. etc. have been active in this market in the area of construction of oil and gas, electric transmission lines, IT, etc. In the area of pharmaceuticals, large Indian companies are represented in the market.

Sidhant Sibal: What kind of convergence we see on foreign affairs between the 2 countries...

Yerlan Alimbayev: In the area of foreign relations, Kazakhstan launched the Conference on Interaction and Confidence Building Measures in Asia (CICA) through the address by President Nazarbayev to the United Nations General Assembly in October 1992, and India has consistently and actively supported the CICA. Interaction in the UN and other international fora has been close and mutually supportive. Views of both countries coincide on all major domestic, regional and international issues. Nursultan Nazarbayev again showed the entire world his wisdom and leadership as a great politician, committed to democratic values, having voluntarily relinquished duties as President in March 2019. After the elections on June 9, 2019 Mr. Kassym-Jomart Tokayev was elected as the new President of Kazakhstan. Thus, a peaceful transition of power in Kazakhstan took place, political succession was announced and all priorities and goals of foreign policy of Kazakhstan remain unchanged. One immutable truth is obvious: Kazakhstan managed to overcome the dramatic rift of epochs only thanks to the wise state strategy, strong leadership, the enormous international authority of the First President of the Republic of Kazakhstan – Elbasy and his absolute national support. Kazakhstan is interested in expanding ties with India, given its growing role in world economy and politics. We are witnessing radical reforms underway in India that are aimed at the full-scale transformation of the country’s economy in order to improve the standard of living of citizens, as well as strengthening national unity and regional integration both inside the country and on a continental scale. Kazakhstan welcomes these transformations and wishes to consolidate our efforts to achieve bigger trade turnover, strengthen political and cultural bonds.

Sidhant Sibal:December 1 has significance in your country, if you can elaborate on it.

Yerlan Alimbayev: On December 1, Kazakhstan celebrates the Day of the First President. This date is of great importance in the history of modern Kazakhstan and is also important in terms of bilateral relations between India and Kazakhstan. Elected by the people to the highest post of the country on December 1, 1991, Nursultan Nazarbayev became the First President of the young state. The personality of Nazarbayev is important for us because his whole life is directly connected with creation and development of independent Kazakhstan. Of course, international activities of the First President are essential part of Kazakhstan's foreign policy. Nursultan Nazarbayev played the same large-scale role in the history of Kazakhstan as world-famous reformers such as Mahatma Gandhi in India, Charles de Gaulle in France, Lee Kuan Yew in Singapore, Atatürk in Turkey, Mahathir Mohammad in Malaysia and many others played in the development of their respective countries. As you know, Kazakhstan inherited unbalanced economy after disintegration of the Soviet Union. The First President went on to make decisive market reforms, sometimes unpopular and tough, but only in that way was it possible to ensure the growth of the economy and to create a stable middle class, a pillar of a stable society.

Sidhant Sibal: Nazarbayev, what has been his legacy. He resigned last year but holds the title of Leader of the Nation.

Yerlan Alimbayev: Recognizing the crucial importance of this factor, the First President proclaimed the equality of rights of all the people of Kazakhstan, regardless of ethnic and religious affiliations, as one of the fundamental principles of state policy. Ethnic diversity has become the country’s greatest strength. In this context, Kazakhstan, like India, is a state that unites many languages, religions, cultures and nationalities. Step by step, through the efforts of the First President, Kazakhstan has rebuilt on the ruins of the former Soviet state. During the first stage of modernization, as Nazarbayev described this period, the President worked to effect a system overhaul, restore the economy and form a new political system. He presented his own formula for development - "first-economy, politics-after". Today, this experience is known as "the Nazarbayev model" or the Kazakhstan way. A major successful achievement of the Republic in that period was the transfer and construction of the new capital of the state, which today bears the name of the First President – Nur-Sultan. From the very beginning of independence, the First President attached exceptional importance to the sphere of foreign policy. Given the realities of the modern multipolar world, he established a multi-vector foreign policy. Having closed the world’s largest Semipalatinsk nuclear test site and abandon of the nuclear weapon, Nursultan Nazarbayev carried out a truly great act of history, showing an example of his peace-promoting policy with his actions and his decision to denuclearize Kazakhstan. Due to close international cooperation and partnerships built by his efforts, Kazakhstan has achieved remarkable results. Over the years, many of the first President's ideas and initiatives have been implemented and are being consistently developed.

Kazakhstan has pioneered a global nuclear security initiative, has achieved a number of results in peacemaking policy and conflict resolution around Nagorno-Karabakh, Iran, Ukraine and Syria. The Republic has launched and continues to develop a global interreligious dialogue based on regular Congresses of Leaders of World and Traditional Religions in its capital. Kazakhstan's peace-loving policy contributed to the country's election as the Chairman of the OSCE, SCO, OIC, non-permanent member of the UN Security Council in 2017-2019, and other international organizations. The Eurasian idea of Nursultan Nazarbayev announced back in 1992 nowadays is being implemented as the Eurasian Economic Union. Kazakhstan has become a member of the WTO, and thanks to the implementation of major infrastructure projects, it has become an operator of growing trade flows between the East and West of Eurasia.

Constructive and reliable relations were established with all neighbouring countries. For the first time in history, Kazakhstan gained internationally recognized borders along its entire perimeter. This was a key and decisive achievement, marking a particularly important milestone in the construction of the state. Today, Kazakhstan is a globally recognized, highly respected and open country with great economic, political, social, innovative and intellectual potential.