Katrina Kaif drinks coffee from Salman Khan's cup, the internet has a meltdown 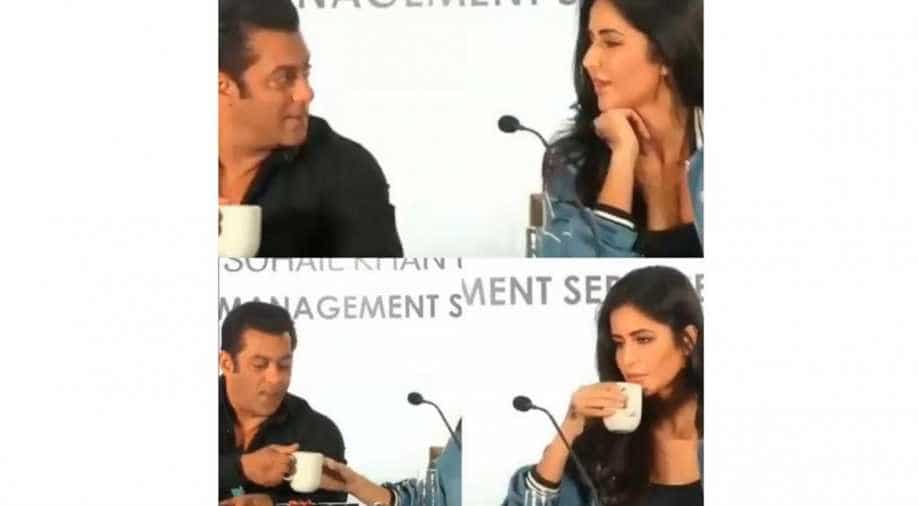 It's never simple between "Tiger Zinda Hai"&nbsplead pair Salman Khan and Katrina Kaif. From being real-life lovers at one point of time to just being friends, the two seem to keep the media on their toes by showing untimely affection in public often.

Seen together at the podium for Dabbang Tour show in Pune, Salman Khan and Katrina Kaif looked visibly comfortable sitting by each other's side. But what caught everyone's attention was the brief moment in which Katrina asked for Salman's cup of coffee and sipped.

If salman khan ever marries anyone it has to be katrina kaif ! THEY ARE MADE FOR EACH OTHER!!!! ❤️? i love these two since i am 5 !!! ?? #SalmanKatrina pic.twitter.com/18Uc54W3Vc

While Sonakshi Sinha was addressing the media, Salman and Katrina were seen sharing the coffee.

Salman and Katrina danced to some of their iconic dance tracks separately and came&nbsptogether to dance to Swag Se Swagat from their latest film, "Tiger Zinda Hai".

#DabanggtourPune whenever Salman Khan and Katrina meet with each other, it's always create the magic. This night will be remember for years #DabanggPuneHungama pic.twitter.com/yHsymQ1UgO

Last year, in an interview, Salman spoke about Katrina's dedication and hard work. He was quoted: "She is so hardworking, like one more, one more take and then I am like 'arey yaar even I am done with this shot now'."

While Katrina revealed earlier: "I don't understand this personal and professional equation. As a capacity on sets, we are all professionals, we all come in the capacity of us being actors. He is an actor, he comes to sets, he is there to work and I am there to work. As a person, he has known me since I was 17, it has been quite a few years now that we have known each other. It is hard to describe our equation but the most important thing is that there is a lot of respect between us for each other. I like him as a person, I like who he is and what he stands for."