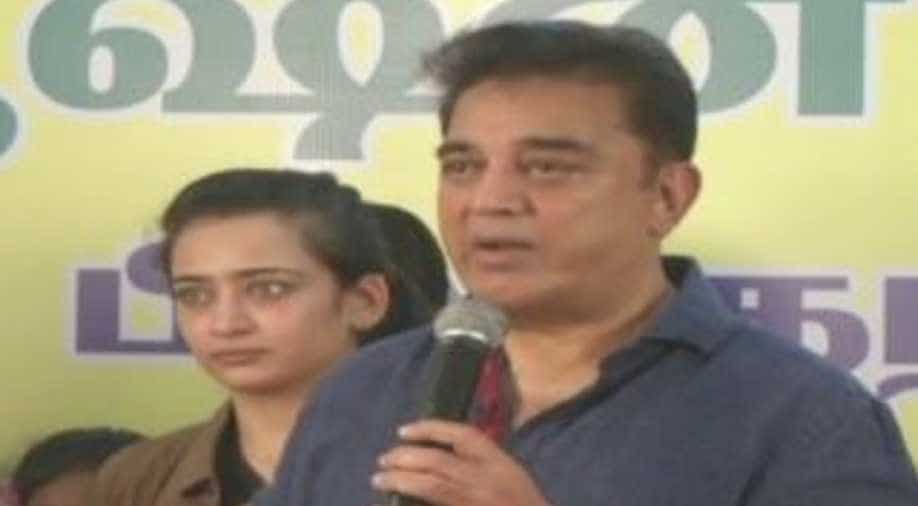 'People have been commenting that I am dreaming big. I want to tell them that it is a dream which ultimately gets materialised,' said Haasan. ? Photograph:( Twitter )

As he turns 63 on November 7, Tamil superstar Kamal Haasan will be spending his day meeting those who have been affected by the Chennai floods. The actor has categorically stated that he will not be celebrating his birthday and instead meet people affected by the torrential rains in the city.

"This year he (Haasan) has decided not to celebrate his birthday while Chennai people are distressed by the rains. Instead, he will be visiting a medical camp, set up by his Narpani Iyakkam (welfare movement) at Avadi," the actor's spokesperson said on Monday.

On Tuesday, the actor started the day early and visited a few medical camps. While addressing the people at a camp in Chennai, the actor said, "There is no connection of this camp with politics but we could use this for that. People have been commenting that I am dreaming big. I want to tell them that it is a dream which ultimately gets materialised."

Ppl have been commenting that I am dreaming big. I want to tell them that it is dream which ultimately gets materialised: Kamal Haasan pic.twitter.com/pjO3a5bNaK

The actor believes that the people of Tamil Nadu together can bring in change through amendments. The actor who is all set to take a plunge into politics has stated that his party will be working for the welfare of the people.

While lauding the rescue efforts of the authorities in the flood-hit areas of Chennai, Haasan also stated that it was important to keep the medical camps disease-free. "Govt arranging water outlets in waterlogged areas. It is equally important for medical camps to detect diseases before it becomes an epidemic."

We had dengue epidemic last time & for various reasons pretended it is not there: Kamal Haasan at a medical camp in Chennai, Tamil Nadu

The actor earlier on Twitter announced that he would not be celebrating his birthday this year.

To those who love me and dislike the idea of my cancelling my birthday celeberations pic.twitter.com/hkSPJj97C9

Haasan will also be launching an app on his birthday which would be the first step towards his political debut. The app will enable him to be in touch with his fans and help in raising awareness about the issues at hand.