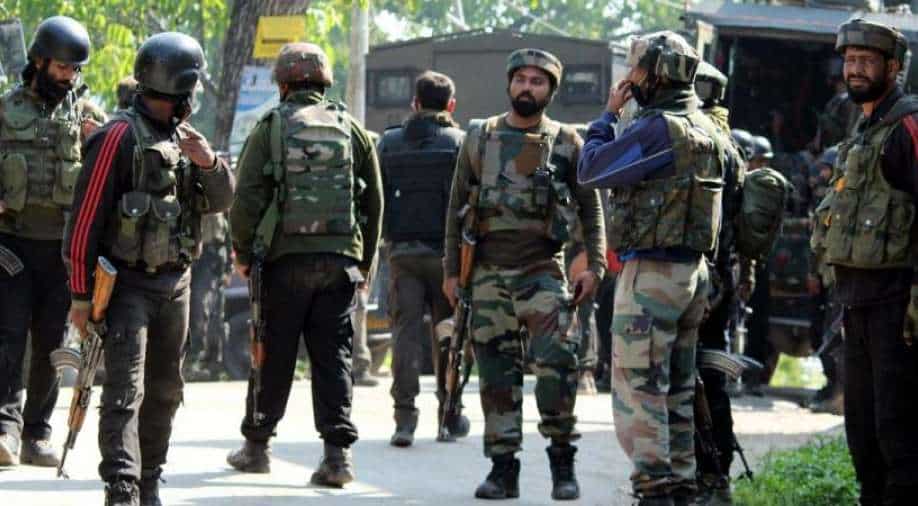 One terrorist — identified as Jahangir Ahmad Wani of Lashkar-e-Toiba — was killed in the firefight. Photograph:( ANI )

Meanwhile, a police spokesperson said security forces launched an operation night based on specific input generated by Shopian Police regarding presence of terrorists in Rawalpora village.

Fresh firing erupted on Monday between terrorists and security forces in the Shopian district of Jammu and Kashmir where a top commander of Jaish-e-Mohammad outfit was among two ultras killed in the operation that entered its third day, police said.

"Fresh contact has been established with the third terrorist at Rawalpora in Shopian," a police officer said.

Earlier in the day, Inspector General of Police Kashmir zone Vijay Kumar said the security forces achieved a major breakthrough by eliminating a top commander of Jaish who was operating under the nom de guerre of Sajad Afghan.

Vilayat Hussain Lone alias Sajjad Afghani, one of the most wanted terrorists in Kashmir, was killed in a fresh exchange of fire with security forces on Monday.

One terrorist — identified as Jahangir Ahmad Wani of Lashkar-e-Toiba — was killed in the firefight on Sunday.

Meanwhile, a police spokesperson said security forces launched an operation on Saturday night based on specific input generated by Shopian Police regarding the presence of terrorists in Rawalpora village.

"During the search operation, as the presence of terrorists got ascertained they were given the opportunity to surrender, however, they fired indiscriminately upon the joint search party, which was retaliated leading to an encounter," the spokesperson said.

According to police records, Wani was active since September last year and involved in several terror crime cases including attacks on security forces and civilian atrocities.

Arms and ammunition including US-made M4 Carbine rifle and other incriminating materials were recovered from the site of encounter, the spokesperson said.

"During the encounter, three houses caught fire while a group of miscreants tried to disrupt the operation and created law and order problem near the encounter site during which some miscreants were also injured," he added.