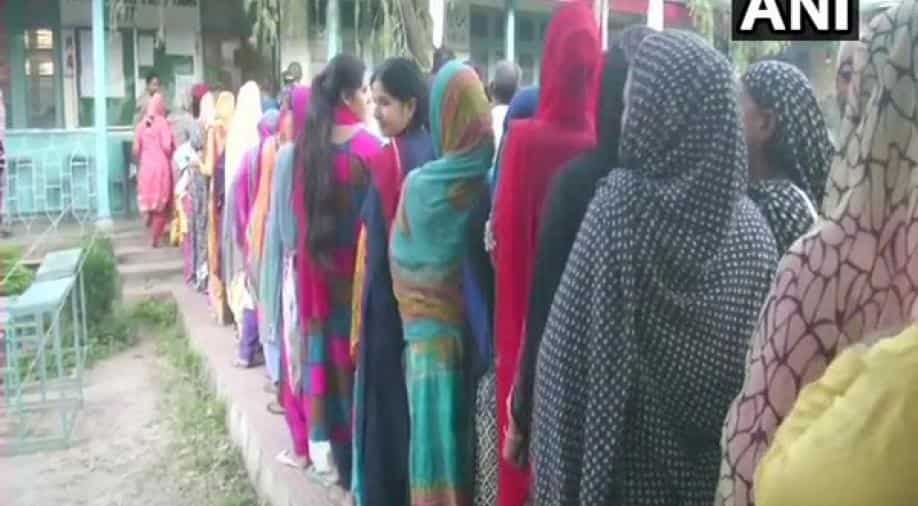 The polling, which began at 7 am, will conclude at 4 pm today, and counting of votes will be done on October 20.

Voter turnout in Jammu and Kashmir municipal polls witnessed a significant boost, with Kargil taking over the lead from Rajouri in terms of voter turnout as of 1 pm on Monday.

Voter turnout in Kargil increased from 33 per cent to 73.6 per cent in a span of two hours. While Rajouri recorded 67.7 per cent, Poonch was close with 63.5 per cent. Jammu and Leh recorded voting percentages of 43.4 and 44.2, respectively.

Bandipore recorded the lowest voter turnout of 2.5 per cent, while Anantnag, Budgam and Baramulla, which are heavily infested by militancy, registered voter turnouts of 6.1 per cent, 12 per cent and 3.7 per cent, respectively.

Amid terror threats and boycott calls by separatist groups and the two main regional parties, the National Conference (NC) and the Peoples Democratic Party (PDP), ), polling for the first phase of municipal elections in 422 of the 1,145 wards began on Monday morning.

Unprecedented security arrangements were put in place by the state authorities and the Election Commission to ensure peaceful polls. Also, all candidates have been provided with either cluster security in hotels or individually in the Valley.

According to the Election Commission of India (ECI), a total of 1,283 candidates are contesting in the 422 municipal wards today. This time, a large number of independent candidates are also in the fray.

This municipal election is also witnessing two significant firsts. In a major development, Electronic Voting Machines (EVMs) are being used for the first time in accordance with the rules that have been amended in 2016.

In another first, the ECI is providing voting facilities to Kashmiri migrants by means of postal ballots. Since the migrants continue to be enrolled in their respective assembly constituencies from which the municipal committees or panchayats would derive the rolls, facilities will be provided for them to vote.

The polling, which began at 7 am, will conclude at 4 pm today, and counting of votes will be done on October 20.