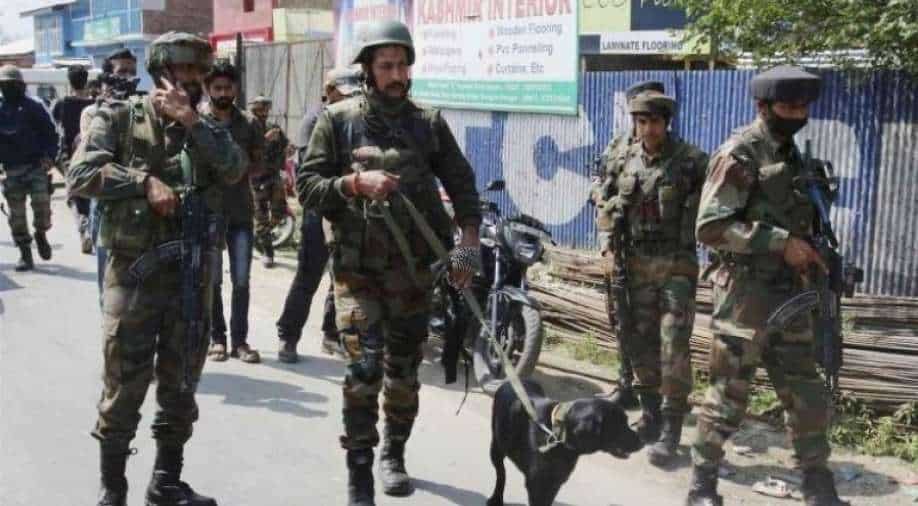 In this file photo, security personnels can be seen in Jammu and Kashmir along with a dog Photograph:( PTI )

The Jammu and Kashmir Police on Thursday claimed to have arrested two terrorists of TRF and two terror associates of the same outfit. The terrorists were arrested in Srinagar's Barzulla area after a barricade was laid by the police along with the CRPF.

They also recovered two pistols, along with two magazines and 30 rounds, from the spot.

They further identified two associates, namely Basit Bilal Makaya S/O Bilal Ahmed Makaya R/O Qamar Abad Qamarwari and Naikoo Imad Nasar S/O Farooq Ahmed Bhat R/O Kiloora Shopian, who were operating with them as OGWs. Both associates have been arrested. In this connection, a case under FIR No. 08/2021 of Saddar PS under sections 7/25 of the arms act and sections 18.23 of the UAP Act has been registered in PS Saddar, "said Jammu and Kashmir Police.

The police said that during the questioning, the arrested terrorists disclosed that they were operating in Srinagar City at the direction of one person, namely Asif Maqbool Dar, R/O MIG Colony Bemina, currently in Dhamam, Saudi Arabia, and Sajjad Gul, R/O HMT Parimpora, currently in Pakistan. Both the Saudi Arabian and Pakistani handlers were providing weapons and money through a network of OGWs that had been identified.