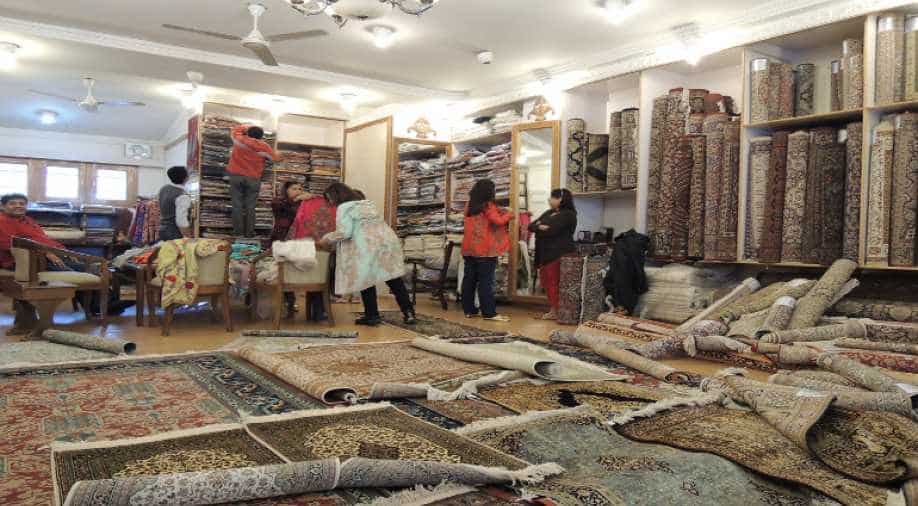 The handwoven silk carpets of Jammu and Kashmir are perhaps the most luxurious items that India showcases internationally. Photograph:( Others )

The north Indian state of Jammu and Kashmir is world famous for its intricately hand-woven silk carpets, which is in huge international demand. The carpet industry of Kashmir which was once the flagship of the state is sadly, however,  facing a fast decline.

The handwoven silk carpets of Jammu and Kashmir are perhaps the most luxurious items that India showcases internationally. Each carpet is like a magic one and if though they do not fly, they have elaborate designs, vivid colour combinations, but above all, a durability which has made the Kashmiri carpet world famous for centuries.

The carpet craft arrived in the Kashmir valley in the 16th century from Persia. After the sufi saint Akhun Rehnuma went on a pilgrimage to Mecca. On his way back he learned the art of weaving carpets from the Persians. The industry expanded under the Dogra rule and the carpets became a favourite in British and European markets.

In recent years, however, this cottage industry has been in decline. in Srinagar, every second household used to have a cottage unit for crafting carpets. Now, there are only a handful of these units left in the city.

WION visited one of the last remaining carpet manufacturing units of Srinagar to try and understand what could be unthreading such a beautiful trade. Mehraj Din has been weaving carpets for three decades and says the younger generations have given up on the craft, thinning out the production.

Veteran carpet traders and exporters say the brand value of Kashmiri carpets in the international market still holds its high.

Says Mubeen Shah, a carpet exporter, ''There are four places in the international market which make these carpets: turkey, Iran, Kashmir and China… they make silk carpets. china make Turkish, Persian and now Kashmiri designs. Lots of retailers sell Chinese carpets as Kashmiri carpets because our brand is better.''

meanwhile, Iran - a rival in the field - has exported products worth 275 million dollars internationally.

Traders say a decreasing production isn’t the only problem. creative designs are struggling to compete with their Iranian counterparts. The material used has also become substandard over the years. Carpet weaving units prefer low-quality Chinese silk yarn to the indigenous silk to bring down production costs.

''In Iran and Turkey, they are promoting designers, individual designers. They are promoting silk carpets with their name. It is just like a brand, for example, you buy a branded watch or a branded bag. the material may not be so great but the brand adds value. The same happens in Iraq. They have developed brands for last 30-40 years and that differentiates between the very high quality and low quality in the market. By introducing new looms, our carpet designs will have better quality. We also have to use mulberry silk. People here had shifted to spun silk which is brought from Bangaluru. ''We need to use mulberry silk and by that will improve on quality this is a traditional industry, where there is little scope to modernise the manufacturing part of it.in other aspects there is a need for modernisation in promoting and marketing like using social media for our branding. The Kashmiri carpet has a good international value,'' Mubeen Shah added.