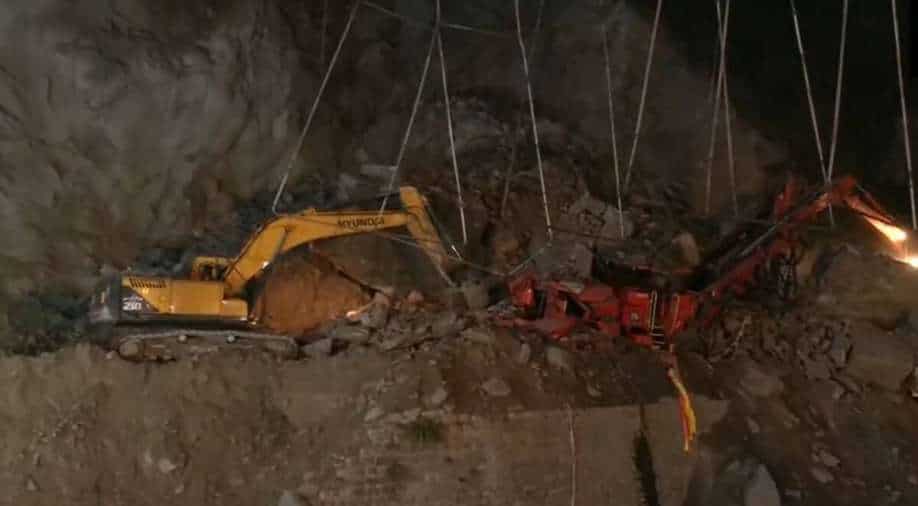 Rescue operations at at Khoni Nallah on the Jammu-Srinagar national highway in Ramban district. Photograph:( ANI )

A joint rescue operation was launched immediately by the police and the Indian Army, officials said. They added that four people were rescued in an injured condition, and several others are still trapped inside the tunnel.

An under-construction tunnel collapsed in the Khooni Nallah-Ramban area on the Srinagar-Jammu National Highway in which 10 people are trapped while three have been rescued in an injured state. The Adit tunnel of T3 caved-in during the intervening night, after which the rescue operation started to save the people trapped inside the debris.

A massive rescue operation is being carried out, but reports say that the face of the tunnel is fully covered with debris and continuous landslides are creating challenges for the rescue team to reach the trapped person.

"A rescue operation was started at 12.00 midnight, as shooting stones remained active. Rescue operations are still going on and are likely to take more time as rock breakers are being used to create space to reach the trapped people. One of the three injured has been shifted to GMC Jammu, where he reached at 4.30 am. Deputy Commissioner Ramban, along with DIG, SSP Ramban, and Proj Dir NHAI and Construction Co. reps, is at the spot, "said a Disaster Management Department official.

The Union Minister, Jitendra Singh, said that a rescue operation is underway, and the situation is continuously being monitored. He tweeted and said, "Unfortunate incident of the collapse of an under-construction tunnel on the National Highway stretch between Ramban and Ramsu in district Ramban, Jammu & Kashmir." I’m in constant touch with DC Sh. Mussrat Islam. Nearly 10 labour workers were trapped under the debris. Another 2 were rescued and hospitalised with injuries. A rescue operation is going on in full swing. Civil and police authorities are monitoring the situation. "

The labourers trapped inside the tunnel were working for Sarla Company, who has the contract for the building of the tunnel.