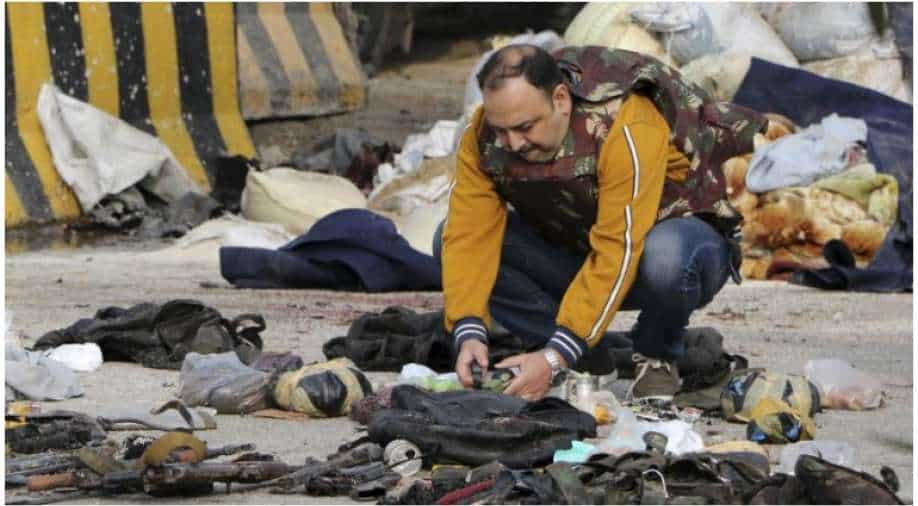 Jammu: Security personnel inspect the site of encounter at Nagrota Ban toll plaza in Jammu, Thursday, Nov. 19, 2020. A gunfight broke out between terrorists and security forces in the Nagrota area of Jammu and Kashmir’s Jammu district early on Thursday. Four militants have been killed. Photograph:( PTI )

Vijay Kumar, Inspector General of Kashmir told the media that Pakistan has amped up activities to send terrorists to India in light of upcoming elections.

Indian security forces gunned down 4 Pakistani terrorists in an encounter in the union territory of Jammu and Kashmir. The gunbattle broke out near the toll plaza in Nagrota near Jammu. The encounter took place around 4:30 am on Thursday.

The terrorists were travelling in a car. Jammu and Kashmir Police intercepted the vehicle at the toll plaza. The terrorists then opened fire and even lobbed a grande at the securitymen. Two personnel of special operations group were injured. They have been admitted to the hospital. Their condition is stable.

11 AK-series rifles and ammunition were recovered from the dead terrorists. Traffic on Jammu-Srinagar highway was stopped by the authorities after the initial report of the encounter.

Jammu and Kashmir Police said that terrorists had freshly infiltrated in India.

Vijay Kumar, Inspector General of Kashmir told the media that Pakistan has amped up activities to send terrorists to India in light of upcoming elections.