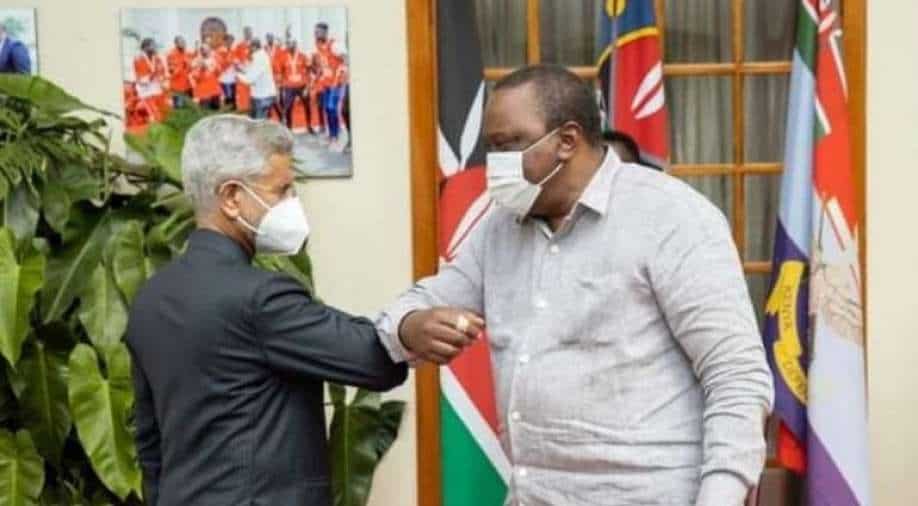 India will be supporting projects in Kenya that call for creating 500,000 new affordable homes, scaling up universal health coverage, 100 per cent food security, and enhancing the country's manufacturing to 20 per cent of GDP by 2022

India has extended its support to Kenya's domestic programmes listed under the "Big Four Agenda" during the visit of External Affairs Minister Dr S Jaishankar even as both sides discussed Indo-Pacific.

Thank President Kenyatta for receiving me so warmly. Handed over a letter from PM @narendramodi.

Our partnership is an example of South-South cooperation. Committed to working with Kenya to realise its Big Four priorities. pic.twitter.com/0V0uKJv5mO

India will be supporting projects in Kenya that call for creating 500,000 new affordable homes, scaling up universal health coverage, 100 per cent food security, and enhancing the country's manufacturing to 20 per cent of GDP by 2022.

What stood out was the use of "Indo-Pacific" term in the joint statement, a term which is increasingly being used and this time by an African country.

The joint statement said, "the two sides held extensive exchanges on global and regional issues including the security situation in the Indo-Pacific region and the Horn of Africa."

Indo-Pacific is geographically seen as a region spanning from the east coast of Africa to the Pacific island states, a region that is the main driver of global economic growth.

On counter-terror, the statement said both sides "expressed their concern at the growing radicalisation and the increase in international terrorism and violent extremism in parts of Africa and Asia".

It highlighted,"As maritime neighbours, India and Kenya recognised the importance of ensuring through shared endeavours greater security, safety and prosperity of the Indian Ocean region. They also noted that terrorism in all its forms and manifestations are a common threat to humanity."

Earlier in the day, EAM participated in the inauguration of the newly renovated Mahatma Gandhi memorial Library at the University of Nairobi. The renovation was undertaken through financial support provided by the Indian government.

Calling the "rise of modern Africa is not just a noble sentiment" but a "long-awaited expectation", EAM at the university said, "It is only when this continent of more than a billion people takes its rightful place that the full diversity of our planet will find proper expression. It is then that we can justifiably declare that the world is truly multipolar."

India has multiple times extended its support for an African seat at the United Nations Security Council. Currently, both India and Kenya are non-permanent members of the UNSC.

This was the first in-person visit of EAM to an African country amid the Covid pandemic. During the visit, he called on President Kenyatta and held talks with his counterpart, foreign minister Raychelle Omamo.