It's a bird...it's a plane...it's the Gripen formation on Air Force Day 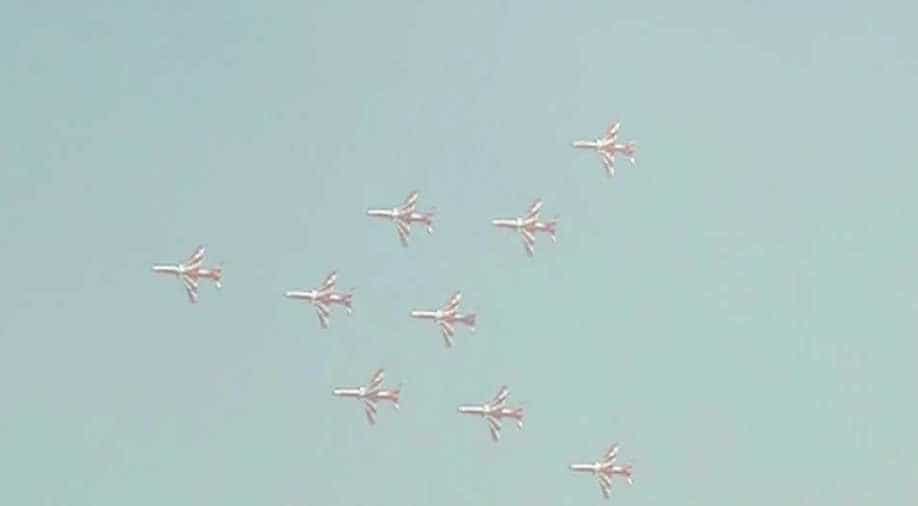 There were a few red faces in the Indian Air Force on Sunday (October 8) as the Surya Kiran aerobatics team, which performed several heart-stopping mid-air manoeuvres during the Air Force Day celebrations at the Hindon Air Base, flew what was called the "Gripen formation".

The fact that Swedish aerospace firm Saab — which manufactures the Gripen fighter planes — is in the running to bag a major contract to provide 100 single-engine fighters to the Indian Air Force, and is locked in a direct contest with US defence firm Lockheed Martin — which is offering its latest F16 figher jet to IAF— ensured that the "Gripen formation" flown by the Surya Kirans, and announced during the live commentary, could not go unnoticed.

The Surya Kirans flew several other formations as well —the Rafale formation, the Sukhoi 30 formation and the Tejas formation. But it was the Gripen formation that proved to be the head-turner with many left wondering whether the IAF had already zeroed in on the Swedish fighter as it's next single-engine fighter plane.

Chief of Air Staff, Air Chief Marshal BS Dhanoa was asked this question minutes after the function to mark the 85th Anniversary of the Indian Air Force ended. The Air Chief consulted one of his fellow officers before replying and said, “No, it has got nothing to do with that. It is just an aircraft shape with an canard in the front. It can be Rafale, it can be Gripen, anybody with a canard in front...(even a) Sukhoi-30. They just called it Gripen. It means nothing. Nothing to do with Gripen.”

The Indian Air Force is aiming to significantly upgrade its combat capabilities by inducting 100 single-engine fighters in its squadrons. A Request for Information (RFI) document—which essentially collects written information on the capabilities of various bidders—is likely to be issued soon.

Both Lockheed Martin and Saab are offering the latest variants of their respective fighter planes—the F-16 Block 70 and Gripen E, respectively.

Since these fighter planes have to be built by an Indian firm in collaboration with a foreign defence firm, Lockheed Martin has paired up with Tata Group and Saab has tied up with Adani Group to manufacture these planes.