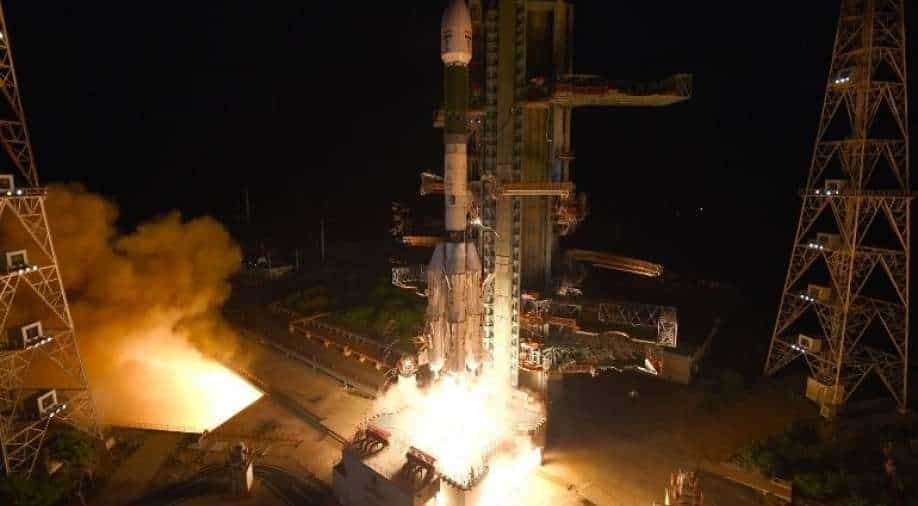 GSLV-F10 launch took place on August 12, 2021 at 0543 Hrs IST as scheduled. Performance of first and second stages was normal. However, Cryogenic Upper Stage ignition did not happen due to technical anomaly. The mission couldn't be accomplished as intended. (Picture courtesy: ISRO) Photograph:( Others )

Towards the end, the final engine takes the satellite to its determined orbit and accomplishes the mission. The latest failure of India’s GSLV rocket’s Cryogenic engine(third and final stage) brings the crucial Cryogenic engine reliability issue to light.

In a relay race, all runners contribute equally, but the last runner has to be the best and the most reliable. Rocketry is also quite similar. A rocket consists of multiple stages(sets of engines) that are stacked vertically.

Each engine has a different level of performance and contributes to getting the payload to space. Once the respective engine completes its task, it detaches itself from the rocket and lets the next one continue the journey.

Towards the end, the final engine takes the satellite to its determined orbit and accomplishes the mission. The latest failure of India’s GSLV rocket’s Cryogenic engine(third and final stage) brings the crucial Cryogenic engine reliability issue to light.

The development of a cryogenic engine has unique design challenges, as it is fueled by liquid Hydrogen stored at

-253 deg C and liquid Oxygen stored at -195 deg C in its tanks. To store these cryogenic fluids, special multi-layer insulation is provided for the tanks and other structures.

Looking at the history of the GSLV rocket(without considering the 4-ton lifter GSLV Mk3), this is a launch vehicle that has had a considerable failure rate, when compared to ISRO’s excellent track record. This variant (GSLV or GSLV Mk2) has had 4 failures in 14 flights. While this number might seem minuscule when compared to International standards and the track record of foreign agencies, it slightly upsets ISRO’s stellar success rate.

In comparison, ISRO most reliable workhorse rocket, the PSLV(which doesn’t have a Cryogenic engine) has had only 2 failures in its history of 53 flights. Of course, Cryogenics has always been a tough technology to master and the GSLV is the first Indian rocket with a Cryogenic Engine. It was in 2001 that the GSLV had its first flight.  For context, India’s heaviest rocket GSLV Mk3(capability to lift 4 tons) has delivered total success in all of its four flights to date. While the credit for the PSLV and GSLV Mk3 missions belong entirely to the Indian Space Agency, it is important to introspect on the GSLV vehicle that has been posing a technological challenge.

He elaborated by recalling that the disintegration of the erstwhile USSR had impacted India’s engine deal with the Soviets. Instead of providing the engines and related technology transfer(as agreed upon), Russia had provided only the five engines. This meant that Indian scientists had to learn, experiment and develop modern control systems for the complex Russian Engine, that was developed in the late 1960s. Notably, this Russian engine was also more technologically complicated than its American and European counterparts. Dr Nair also added that having five liquid-fuel boosters and one solid-fuel motor in the first stage on the GSLV increased the complexity of that rocket as a whole.

While the Cryogenic engine modelled after the Russian technology was very complex, India also eventually developed its Cryogenic engine called C25. It is the C25 that has flown as the third and final stage of the GSLV Mk3. To ISRO’s credit, the Mk3 rocket has delivered successes in all four flights. Some of the technology on the Mk3 rocket are scaled-up versions of the highly reliable PSLV rocket. When Zee Media asked if the reliable Indian Cryogenic engine on GSLV Mk3 could be scaled down for GSLV Mk2, Dr Nair replied in the affirmative. However, he stated that it would be a cost-intensive and time-consuming process that could take at least six years for the process of development, qualification and testing.

Given India’s limited choice of launch vehicles - PSLV, GSLV and GSLV Mk3 and the upcoming SSLV, ISRO must rectify the troubles on the GSLV rocket and its Cryogenic engine. This is necessary given that an important NASA-ISRO mission called NISAR (NASA-ISRO Synthetic Aperture Radar) launch is planned on this very vehicle. Chairman ISRO, Dr K. Sivan had earlier told Zee Media that this NISAR mission would fly by late 2022 or early 2023 on a GSLV Mk2 rocket from Sriharikota. Given that the GSLV fills the gap between the PSLV and the GSLV Mk3, it is a significant vehicle in India’s stable, with prospects for commercial use. So far, ISRO only flies the PSLV to carry commercial satellites that weigh less than 1.5 tons. Perfecting the GSLV Cryogenic engine would only increase India’s gains from commercial launches, by carrying foreign satellites weighing up to 2.5 tons to a higher orbit.

According to a launch vehicle expert who spoke to Zee Media, the Cryogenic engine(topmost stage) must have one notch higher reliability than the second stage, just like the second stage must have higher reliability than the first. The expert, who wished to be unnamed, adds that failures could also happen due to minor errors like a loose bolt or a missing pin or even non-conformances at the manufacturing level. Thus, it was emphasized that ISRO work on establishing stricter quality controls, review protocols and double-checks to avoid such errors. It was added that the rectification needed to be done at respective levels, depending on what exactly led to the Cryogenic failure on Thursday(August 12th).

Like a successful relay team gets the combination of four runners right, ISRO must master the technology of each of its rocket engines, have a stable of highly-reliable rockets that have varied payload carrying capacities - SSLV(500kg), GSLV MK2 (2.5ton) and GSLV Mk3(4ton and beyond).