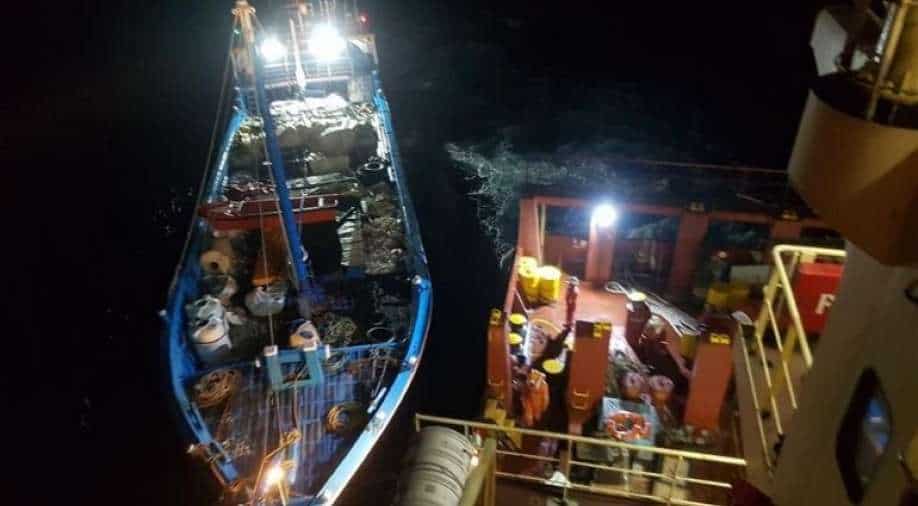 Two merchant vessels - MV SKS Mosel and MC MCP Salzburg, in the region were identified and diverted to the location of the distressed vessel. Photograph:( WION )

Jointly developed by the ISRO and ICG, the DAT is a low-cost and effective satellite transmitter built for fishermen.

The Distress Alert Transponder (DAT), an indigenous device developed by the Indian Space Research Organization (ISRO) in consultation with the Indian Coast Guard (ICG), has saved the lives of nine Indian sailors.

The nine-crewed Mechanised Sailing Vessel (MSV) Annai Vailankanne Arockia Vennila, was stranded at the high seas and faced with on-board flooding amid rough sea conditions when it was sailing between Tuticorin (south Tamil Nadu) and the Maldives, owing to a technical snag.

The Indian Coast Guard’s Maritime Rescue Coordination Centre (MRCC), Chennai received the vessel’s distress message, sent via DAT by 4 pm on Tuesday. At the time of the incident, the vessel was 170 nautical miles from Tuticorin and 230 NM from the Maldives. The MRCC launched the National Search and Rescue Services and activated the International Safety Net (ISN) to coordinate the search and rescue.

Two merchant vessels - MV SKS Mosel and MC MCP Salzburg, in the region, were identified and diverted to the location of the distressed vessel.

The MV MCP Salzburg arrived at the distressed vessel in the early hours of Wednesday (2:30 a.m.) and safely rescued all nine crew members before proceeding to its next port of call (NPC) Maldives, where the rescued crew will disembark.

DATs are carried by Indian fishing boats, Mechanised Sailing Vessels, Coastal Vessels and other small vessels. The distress alert is monitored 24x7x365 by the Coast Guard MRCC at the respective regions.

Jointly developed by the ISRO and ICG, the DAT is a low-cost and effective satellite transmitter built for fishermen. At a press of a button, this device transmits distress alerts to the search and rescue authorities through the INSAT series of satellites. In case of emergency, the user can select a distress message (boat sinking/fire/medical help/other emergencies). The DAT combines the message with the boat’s position (based on GPS) and transmits the same, every few minutes, till it is switched off manually or until the battery lasts.

The Indian Coast Guard has been emphasising that fishermen must carry the DAT device and also register it for effective, timely search and rescue. The DAT unit also helps fishermen receive other information such as potential fishing zones, weather alerts, etc.

The Indian National Satellite (INSAT) system is one of the largest domestic communication satellite systems in the Asia-Pacific region, with multiple operational communication satellites placed in geostationary orbit. Established in 1983 with the commissioning of INSAT-1B, it initiated a major revolution in India’s communications sector and sustained the same later.

According to ISRO, the INSAT system with more than 200 transponders in the C, Extended C and Ku-bands provides services to telecommunications, television broadcasting, satellite news-gathering, societal applications, weather forecasting, disaster warning and Search and Rescue operations.